I Will What I Want: American Ballet Theater Soloist Misty Copeland's Under Armour Ad Tackles Racism, Feminism and the Athleticism of Dance 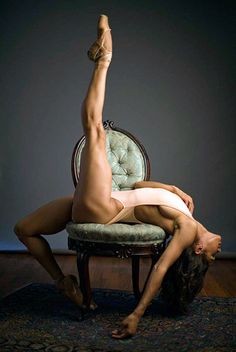 ABT's Misty Copeland makes a strong case for athleticism in dance in a new ad for Under Armour's 'I Will What I Want' campaign. (Photo : Gregg Delman)
Subscribe to Classicalite Viral
Share on Facebook
Twitter

As part of their new I Will What I Want campaign geared towards female athletes, Baltimore's Under Armour has released a commercial featuring American Ballet Theater soloist Misty Copeland assigning a confident Y-E-S to the ongoing debate of whether or not ballet is, in fact, a sport.

Copeland continues through the one-minute advert, twirling and kicking her way to the front of the race for gender and athletic equality. (In its 75-year history, Copeland is only the third female African American soloist of the Ballet Theater.)

Then, we hear the voice of Raiya Goodman, a 14-year-old African American reading her own rejection letter:

“Thank you for your application to our ballet academy. Unfortunately you have not been accepted. You lack the right feet, Achilles tendons, turnout, torso length and bust. You have the wrong body for ballet. And at 13, you are too old to be considered.”

Although Copeland may not have received said letter, she feels the words perfectly describe the resistance that she, herself, endured coming up in the ballet world--which she speaks of heavily in her memoir, Life in Motion: An Unlikely Ballerina, published this past March.

Copeland explains, “Once I hit puberty I experienced all of those things. I was told I had the wrong body type, to lose weight, that I had to lengthen because I was too muscular and that my bust was too big.”

She continued to make the point that other dancers will be able to relate to the visual of her sculpted body as a symbol of the intense training and practice that goes into dancing for the ABT.

“A lot of people think of dance as a really sort of frivolous thing, that you just kind of get on the stage and twirl around,” reminded Copeland, who ditched her tutu here because “showing the physicality of what it takes to be a dancer, and to be a professional ballerina, and is giving us the respect that we are just as hardworking as any athlete.”

Watch the groundbreaking advert in all its glory below.