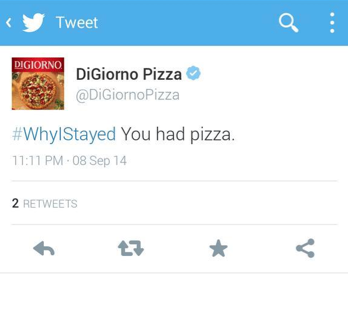 DiGiorno Pizza proving that they are very bad at delivery. (Photo : Twitter )

Its not delivery it is...an offensive tweet about a really horrible real life issues. In the wake of Ray Rice being fired from the Ravens for abusing his wife, the nation has taken to twitter to cry out against domestic abuse with the hashtags #WhyIStayed and #WhyILeft. However, in a world where a different social cause comes into vogue every few weeks, only to disappear without making any lasting difference, who can keep up. Cerently not DiGiorno. The pizza company either intentionally made a horrible joke, or inadvertently shed light on just how little people pay attention to what they are tweeting, when they posted an offensive Why I Stayed hashtag of their own. The company has since spent a lot of time on Twitter, personally apologizing for their comments.

Twitter and other social media websites have proven to a great outlet for important social conversations. One of these conversations currently going on, is about domestic violence. Brave souls have been opening up about their experiences with the hashtags, #WhyILeft and WhyIStayed. However, DiGiorno Pizza recently tried to cash in on the social conversation, by hijacking the hashtag, because using pressing social issues to sell products is always a good idea. Even worse when you use them blindly, without knowing what the point of the hashtag is about.

Digiorno Pizza caused a stir when they Tweeted:

The company quickly took the tweet and down, and issued an apology:

“A million apologies. Did not read what the hashtag was about before posting.”