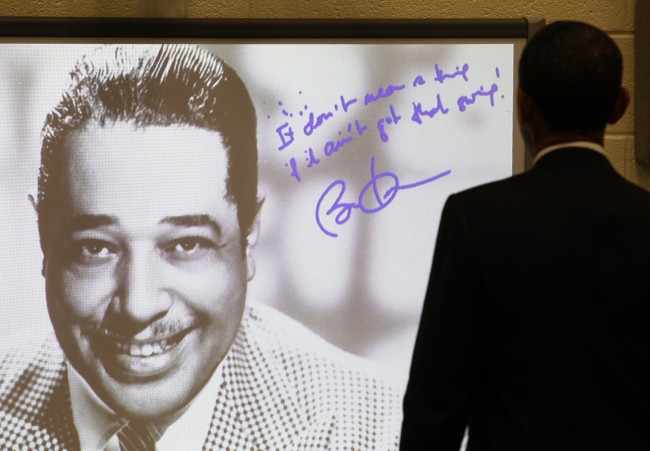 U.S. President Barack Obama stands back after autographing a screen showing Duke Ellington during a visit to Kenmore Middle School in Arlington, Virginia (March 14, 2011). Obama wrote: "It don't mean a thing if it ain't got that swing!" (Photo : Reuters)

Perhaps the mark of a great artist is hindsight's ability to divide his or her life's work into stylistically discrete periods. Beethoven, Miles, Rick Martin--artists such as these exhibit a perpetual growth and maturation of style and substance that no one set of nomenclature could even attempt to adequately describe.

Likewise, such is the case with Edward Kennedy Ellington. That's "Duke" to you, man.

To be sure, the Ellington extant in the Black and Tan Fantasy is not the same "Duke" of "It Don't Mean A Thing (If It Ain't Got That Swing);" which, in turn, is markedly different from the Pulitzer casualty that birthed The Clothed Woman. Indeed, such aesthetic expansion is to be expected from one whose career spans longer than five decades. And for the most part, E.K. Ellington consistently delivered fresh and forward-thinking compositions--for his epoch, anyways.

Toward the end of his life, however, as the role of international ambassador of jazz gradually usurped his identity as intentional jazz innovator, the "Duke" retreated back to those hackneyed, familiar idioms that first brought him to the big dance. Of course, geriatric folly doesn't necessarily mar one's legacy overall, especially not when said legacy begins back in 1926 with a tune like "East St. Louis Toodle-O."

The Opus No. 1 (EK"D"E) in a catalog that, at present, numbers more than 6,000, "East St. Louis Toodle-O" was used by Ellington and band as their signature song until 1940. Featuring the unmistakable growl of trumpeter and co-composer J.W. "Bubber" Miley, the song is thought to have been in The Washingtonians' repertory (Ellington's first band) by October of 1926.

According to jazz historian Mark Tucker, Miley apparently conceived of the minor mode melody after seeing a sign "in the Boston area advertising Lewando's, a local dry cleaner's business (probably in the summer of 1926)." Miley's distinctive approach to timbre and phrasing would come to epitomize the band's sound, over and above Ellington's arrangements even, up until Duke kicked him out in 1929.

As a title, "East St. Louis Toodle-O" probably deserves a bit of clarification, at least with regards to geography. Just what the heck is a "toodle-o," exactly? Tucker asserts that the Vocalion record label (the first company to record the song), hoping to increase sales in the predominantly black neighborhoods in eastern St. Louis, added a proper "Eastern" distinction to the title.

Less definitive, though, is the actuality of a "toodle-o," itself. Bubber Miley's extra-musical (i.e. drink-induced) associations were once recalled by Ellington, himself:

"This is an old man, tired from working in the field since sunup, coming up the road in the sunset on his way home to dinner. He's tired but strong, and humming in time with his broken gait."

Ellington's own thoughts on the word, which he pronounced "toad-low," concerned a type of broken saunter. Nevertheless, the word he most probably wanted was "todalo," which is, in fact, a specific dance step.

Complicating matters further, various spellings of the word appeared on the Vocalion, Brunswick, Columbia and Victor releases of the early '20s, as well as the stock sheet music printed by Gotham in 1927. Despite the confusion in both definition and spelling, one thing remains certain: the term "toodle-o" was never meant as a means of bidding one farewell.

From its rather ominous introduction, to the jaunty second theme, to its final, lone cymbal crash, Duke Ellington's "East St. Louis Toodle-O" is the sound of a precocious composer that knows he's got something good going. Like Beethoven's Piano Sonata No. 2 in A Major, Op. 2 or Miles' modal cool (or Menudo's Chiquitita), "East St. Louis Toodle-O" provides but a glimpse of what that upstart will soon become.