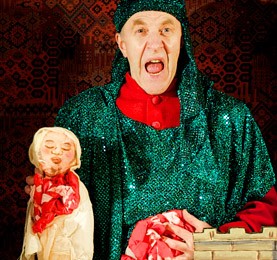 Stans Cafe will present a puppet play titled "The Cardinals" at the Museum of Contemporary Art Chicago (Photo : Stanscafe.co.uk)

The Museum of Contemporary Art in Chicago will present Stan’s Cafe: The Cardinals, a story of three Catholic cardinals on an evangelical mission to broaden knowledge of the Bible through a puppet show.

The show will be performed without words on a simple set. However, the actors will portray many moments of humor, absurdity, and conflict in this modern reflection on the complexities of faith in today’s world.

The show begins with the cardinals discovering that the puppets for their upcoming puppet show are missing and that must enter the miniature stage themselves, assuming the roles of both puppets and puppeteers with both heartfelt sincerity and theatrical naivete. The scenes in the show will race through religious history, as the cardinals act out their own take on the Bible’s book of Acts and Revelations, adding elements of history from the Crusades to present-day middle east. The puppet stage is only part of the set for the play, the chaotic behind-the-scenes action shows the cardinals as they collaborate and argue. Their stage manager, a young, muslim women, both supports them and intercede as she questions the story they are presenting. The Cardinals refers to the "mystery plays" of the medieval church, in which Bible stories were depicted with songs for the masses. The performance also explores the leap of faith that audiences willingly take when they enter the theater.

Stan’s Cafe (pronounced “caff”) is a group of artists from various disciplines, based in Birmingham, England, and named after a favorite eatery in London’s Brick Lane.

The Cardinals will be presented as a part of the Chicago International Puppet Theater Festival and will take place January 22 to 24 in the Edlis Neeson Theater at the Museum of Contemporary Art Chicago. Tickets for are $28 and can be purchased here.

Demon-Puppet Saga 'Hand to God' Headed for Broadway in Spring