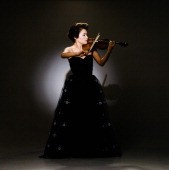 Violinist Kyung Wha Chung has released a statement after she made headlines for telling off a coughing child at her recent concert. (Photo : Getty Images)

Chung, who is from South Korea, is hailed as a violin prodigy but has been retired for some time, partly due to a finger injury. The show was her first London performance in 12 years.
But during this show, the 66-year-old violinist lashed out at a child who was coughing during her performance of Mozart’s Sonata in G.

“Maybe bring her back when she’s older,” she rebuked to the child’s parents.

This outcry made headlines all over the world and recently Chung has decided to give an explanation for her seemingly strange behavior. The violinist describes being overwhelmed with warmth at the concert hall but also having to deal with the pressures of being back on stage after so long. She also mentions adults coughing, as well as the infamous child’s cough, as “stealing her focus.”

“I have always welcomed children to my concerts, and indeed think it is a vital part of music education that they experience and discover the joys of live performance. However, I think it is also important that the very youngest children are taken to appropriate events, where they can feel comfortable to move, whisper and react animatedly. The concept of “children’s concerts”, which foster much more relaxed environments in which small children are actively encouraged to engage with music on a physical level, is the perfect example of this. It should never become an ordeal for the child to sit attentively – many adults struggle to manage this themselves!”

While some don’t see her statement as being apologetic or conciliatory enough, many agree with Chung’s reasoning. Which side do you stand on?