The Mariinsky Theatre's Two Week's Residency at the Brooklyn Academy of Music Opens with Rarely Seen Opera “The Enchanted Wanderer” by Rodion Shchedrin on Jan. 14 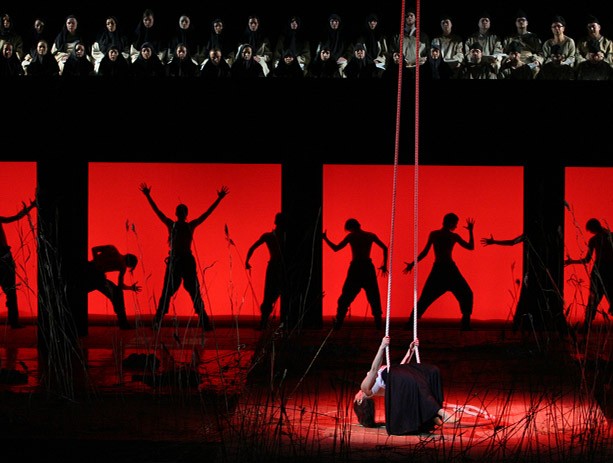 "The Enchanted Wanderer" will be performed at BAM on January 14. (Photo : bam.org)

Rodion Shchedrin’s rarely performed opera “The Enchanted Wanderer” will open up the 2015 Winter/Spring Season at the Brooklyn Academy of Music. This will be the first performance of the world-renowned St. Petersburg’s Mariinsky Theatre two-week residency at BAM.

“The Enchanted Wanderer” is a beautiful piece that has rarely been seen on stage. The opera merges gypsy songs, Russian Orthodox choral music, and traditional Slavic instruments with 20th-century idioms. Based on the short story by Nikolai Leskov, “The Enchanted Wanderer” is about Ivan, the eponymous wanderer, who embarks on a series of sordid misadventures that lead to his unlikely embrace of monasticism. The exalted Valery Gergiev conducts this musical treasure, staged amid the reeds of Russia’s mythic past and evoking the fabled lore of Baba Yaga, Mussorgsky, and Rimsky-Korsakov alike.

The Shchedrin work, composed in 2002, is the Mariinsky’s only opera and will have only one performance and will be directed by Alexei Stepanyuk. The piece will be in Russian with English subtitles.

The Mariinsky Ballet is known as a cultivator of innovation and talent in the arts world. Under the leadership of artistic director Gergiev, the Mariinsky, which is comprised of an orchestra, chorus, ballet and opera company, remains at the forefront of the international arts scene. Gergiev will conduct the production of Tchaikovsky’s “Swan Lake” on Jan. 15, and performances of Prokofiev’s “Cinderella” on Jan. 17 and 18. Other performances from the Mariinsky at BAM include “Chopin: Dances for Piano,” a single evening of repertory works including Michel Fokine’s “Chopiniana,” Jerome Robbins’s “In the Night” and Benjamin Millepied’s “Without.”

“The Enchanted Wanderer” will be performance one night only Jan. 14 at 7:30 p.m. Don’t miss this once in a lifetime chance to view this magnificent work. For more information or to purchase tickets, click here.