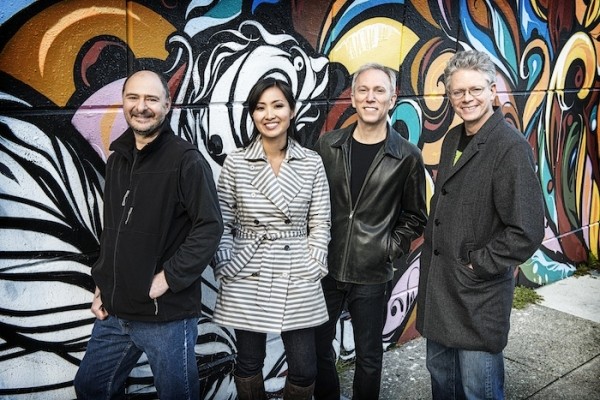 Kronos Quartet will be featured on a new album, as well as performing a show at Carnegie Hall. (Photo : Press Photo/Jay Blakesberg)

Centredisc will be releasing a new album titled Tundra Songs featuring Kronos Quartet in a trio of works by Canadian composer Derek Charke. Inuit throat singer, Tanya Tagaq will also appear on the album, which will be released in March. Kronos will also be playing the world premiere of Charke’s Dear Creator, help us return to the centre of our hearts at Carnegie Hall.

Along with the music by the Kronos Quartet and Tagaq, the disc will also include Cercle du Nord III which, like Tundra Songs, incorporates environmental sounds from northern Canada; and four of Charke’s series of Inuit Throat Song Games.

Charke, who is known for his works that address current environmental issues, traveled with his gear to the Nunavut capital of Iqaluit on Baffin Island for Tundra Songs. He took a two-day trip on the ice by dog sled to record the sounds of cracking and grinding ice sheets, shrimp, krill, and other marine life (via hydrophone), the shrieks of ravens, and various sounds of daily life in the region’s communities.

Kronos will also be performing the world premiere of Charke’s Dear Creator, help us return to the centre of our hearts, at Carnegie Hall, which was inspired by a visit Charke made to the Athabasca Oil Sands in northern Alberta. The program will also include the world premiere of Dutch composer Merlijn Twaalfhoven’s inventive On Parole, featuring the student musicians of Face the Music. A major highlight is the New York premiere of Kronos’ ambitious multimedia production Beyond Zero: 1914–1918, a collaboration with composer Aleksandra Vrebalov and filmmaker Bill Morrison. Written to mark the 100th anniversary of the start of World War I, Beyond Zero: 1914–1918 interweaves music, archival audio recordings, and films of the Great War that, until now, have never been seen by modern audiences. The program will be completed by Bryce Dessner’s luminous Tenebre.

Tundra Songs will be released on March 10. The Kronos Quartet performance of Charke’s works will be on March 7 at Zankel Hall at Carnegie Hall. Click here for more information or to purchase tickets for the performance.