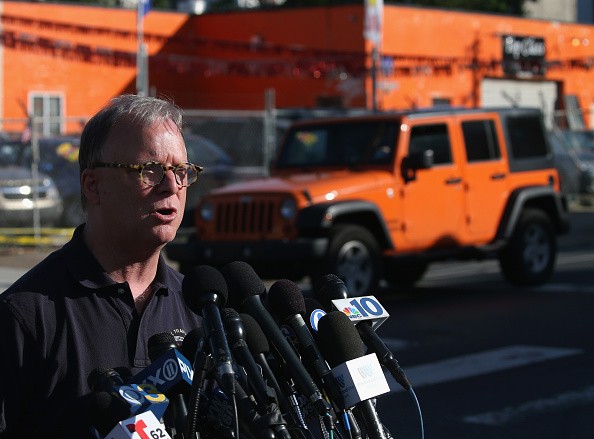 NTSB spokesmen Robert Sumwalt briefs the media on the latest findings into Tueday's Amtrak train derailment, May 14, 2015 in Philadelphia, Pennsylvania. Today another body was found raising the death toll to eight with more than 200 injured. (Photo : Mark Wilson/Getty images)

Having been the subject of much hate for an insensitive Tweet, violinisit Jennifer Kim has come under scrutiny after typing "Thanks a lot for derailing my train. Can I please get my violin back from the 2nd car of the train?"

It's been reported that the Amtrak train which killed eight passengers and injured hundreds derailed in Philadelphia after proceeding at twice its normal speed on its route Tuesday night. The speed control system that could've prevented the wreck "was tantalizingly close to being operational" and was also "delayed by budgetary shortfalls, technical hurdles and bureaucratic rules" officials said Thursday.

With many recounting the story as a terrifying experience, the violinist, thus, hasn't rallied much sympathy for her words. Screen shots show that Kim, a member of the Washington National Opera Orchestra and the American Symphony, spoke in haste over the status of her violin.

.@vinoviolin I hope you get your violin back from under the bleeding people. Good luck!

Tweeting just moments after the crash, perhaps the violinist wasn't aware of the toll it took on the passengers.

The Korean-American professional violinist may have landed herself into a media storm after surviving the crash and remaining disaffected but the tragedy exceeds the parameters of social media with its death toll and injury report.