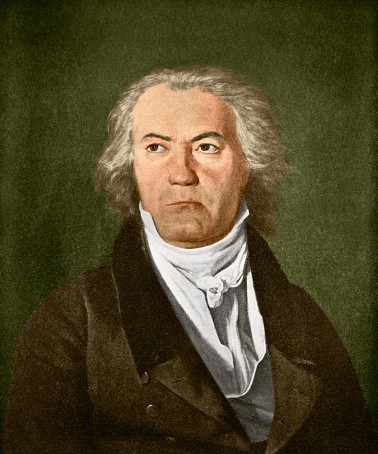 Color enhanced image of Ludwig van Beethoven, (1770-1827). Painting by Ferdinand Georg Waldmuller in 1823. Ludwig van Beethoven (1770 or 1771-1827) was a German composer and pianist. A crucial figure in the transition between the Classical and Romantic eras in Western art music, he remains one of the most famous and influential of all composers. Beethoven was born in Bonn, but moved to Vienna in his early 20s, studying with Joseph Haydn and quickly gaining a reputation as a virtuoso pianist. His hearing began to deteriorate in his late twenties, yet he continued to compose, conduct, and perform, even after becoming completely deaf. (Photo : Omikron/Getty Images)

The supposition that one of history's greatest composers, Ludwig van Beethoven, was African is not a new one. But, with more findings unearthed, a new website has devoted itself to the very idea that Beethoven was indeed running from his roots.

During a point in time when the European slave trade was rampant, much information that existed about Africans and their identity was ultimately thrown away along with their humanity. Much like in Western society, the lens that focused on Africans was consciously honed on their slave legacy.

While most European interpreters may have missed the beat, it's always been a theory that Beethoven, much like history at the time, had misconstrued his ethnicity to avoid the scathing racism that pervaded European and Western thought.

Colonialism may have contributed to a complete disregard for humanity--contributing the theory (a la Homi Bhabha) that subjects of the "third world" were "savages"--and that's case in point why the artist may have failed to mention where he was from.

But it hasn't stumped everyone, including Emil Ludwig, who writes in his book Beethoven, "His face reveals no trace of the German. He was so dark that people dubbed him Spagnol [dark-skinned]."

So while the world may be onto him and his past, it certainly holds no bar over the composer to date. In a more progressive society, thus, the heavyweight's identity is that of his quality as an artist--not the hue of his skin.

But for now, check him out below.

How to Buy Locks of Mozart, Beethoven Hair at Sotheby's London Auction [LISTING]