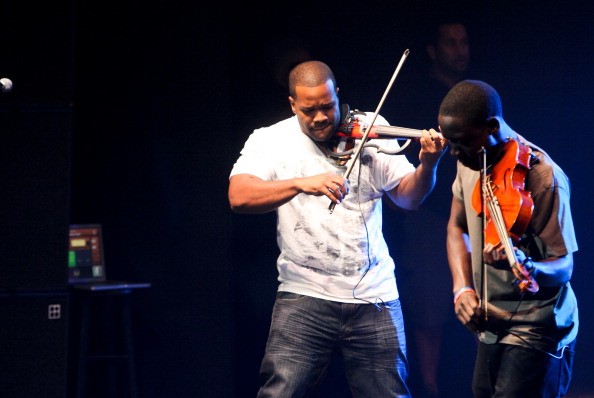 Steeped in classical training and glued to the stage---they noted that their 8/17 show at the Rockwood Music Hall was their 103rd of the year---it would be inaccurate to say that Black Violin is "throwing out the rulebook". Still, the impish delight with which Kev Marcus hyped his audience on Monday night suggested an insatiable penchant for mocking expectations. Following a rousing introduction, he began, "I know some of you thought you were coming to a quiet violin concert tonight. Well, rule #1: This is a party. Rule #2: Flash photography is encouraged (we love it) ... And don't keep it to yourself; make sure to tag us."   Further poking fun at the concept of blending classical music with hip-hop (and turning their backs to a generation of labeling and partitioning), Black Violin's namesake, along with its upcoming album Stereotypes, both appear to confront music-goers more than they do social politics.

Even at the time of Marcus's warning, the Rockwood was already overflowing with stone-faced admirers shoulder to shoulder with rambunctious enthusiasts. A hefty few, I'm told, came across Black Violin in the most obvious of ways: "Biggie meets Two Cellos" ... "David Oistrakh meets 2Pac," and so on. If it seems extreme that pure curiosity could lead so unquestioningly from a 'related video' link to a Monday night out, Black Violin's origin story proved even more enlightening. After a thrilling, Arab-influenced piece called "Dirty Orchestra," violinist Kev Marcus regaled the crowd with the tale of how he and violist Wil B. met in high school orchestra. "In 2nd period", he explained, "we'd be playing Beethoven, Mozart, and Bach... but on our way to 3rd period, we'd be listening to Biggie or Wu-Tang ... So for us, we just put two worlds together." Marcus described that fusion as if it were entirely self-apparent, like an inventor who had all the tools in front of him and visualized the solution.

Wasting no time, they quickly segued into a piece that needs no further description: "A-flat". Sharing the classical affinity for designations as opposed to titles, "A-flat" takes a familiar motif and contorts it into a cinematic bout of dueling strings. One early observation, after considering the decorous charisma upheld by Kev and Wil throughout the introduction, was that it occasionally felt as though they were meant to play with (read: lead) a larger ensemble. Then, during "A-flat", the talents of Black Violin's accompanists (a backing drummer and DJ) stepped out of the scenery to grant that wish. Their DJ could be described as an invaluable aid, attaché, and archivist for the very best of what Black Violin produces. These samples, at times, gave the impression that an orchestra was trailing them at their heels. Meanwhile, the drummer commanded more of a presence than the most intricate of artificial backbeats. Whenever "A-flat" returned to the string motifs, the rhythm section was left completely unrestricted. The drums filled a necessary vacuum, conjuring up impressive solos against the ethereal vibratos; this, in part, kept the hip-hop element of the ensemble in plain sight at all times. 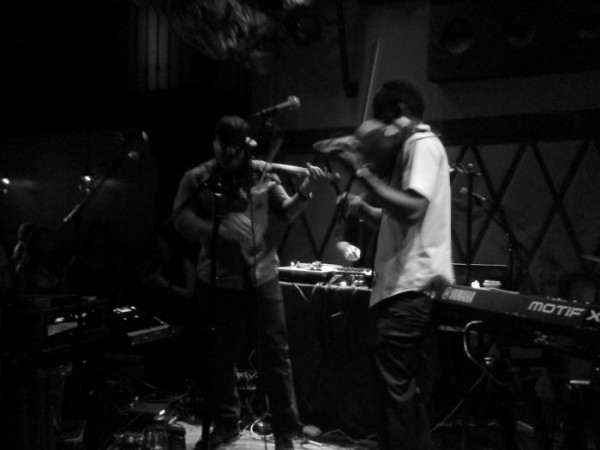 All intricacy aside, Kev and Wil are nothing if not crowd-pleasers. For them, pop music is just as much a part of their act as hip-hop and classical. Perhaps they intend pop music to serve as a bridge across their diverse audiences. On the other hand, perhaps it's just another platform for them to get creative with and exlore. Among others, Ed Sheeran's "Thinking Out Loud" (known for its acoustic-driven Motown groove) made an unexpected appearance. It ushered a role-shift for the duo. Wil B. took the microphone unencumbered while Kev plucked away at his violin for a delightfully tropical-sounding accompaniment. Another song, covered later in the concert, was Wiz Kahlifa's "See You Again."  This time, Wil effortlessly took on the role of vocalist/keyboardist.  Meanwhile, Kev's embellishments on the underlying 4-chord progression seemed as irresistible to him as they were to the listeners.  Pharrell Williams' "Freedom" and Michael Jackson's "Beat It" also made an appearance in the mix.

As they snuck in a single called "Invisible" from their upcoming album Stereotypes, Black Violin took on a more serious tone. Featuring the pre-recorded raps of Queens-native Pharoahe Monch, "Invisible" revealed something satisfying about Black Violin's approach to genre fusion: that they rely less on gimmicks to woo their audience, and more on their well-rounded (and well-versed) musicianship. The melancholic delivery of Wil B's choruses channel the soulful side of hip-hop, while Kev cycles through an intensive series of figurations. Not nearly so uniformed as the samples favored by hip-hop purists, Kev's figurations wield their power using an unwavering staccato---a disruptive looking glass for Wil B as he sinks further into noir-ish malaise.

Equally effective is their ability to intellectually apply referenced material. For their final track, the opening melody from Elder Brackett's well-known Shaker song, "Simple Gifts" give birth to an entirely fresh composition. Marked by several cinematic departures, the cheerful main theme is the unifying factor in a story whose vastness warranted no encore. The arc of their set-list had been structured, if perhaps calculated, to perfection.

The gems of the evening, "Another Chance" and "Losing Control", were deeply sorrowful tunes, despite their hopeful undertones.  In "Another Chance", Kev Marcus is at his most evocative, sporting a longer violin motif that was as exotic and tearful as something out of Rimsky-Korsakov's "Scheherazade". As often as it recurred, it never failed to well up the tears. Lyrically, the song was just as gripping. Integral to the focus of the album---combating stereotypes---the recurring mantra, "I can't change the past, but I control the future," is a lone declaration of optimism in a song otherwise drowned in misery.

"Losing Control" is more rhythmically possessed.   The drums drive the song forward in their tightest and most versatile appearance.  The chorus, and subject, of "Losing Control" is self-explanatory, and is driven by Wil B's fixating melody.  Equally as impressive are the interludes played by Kev Marcus, which seemed to draw from the same modal influences as "Another Chance", but more expansive, and tethered in lockstep to the marching drums.

Keeping with the notion of combating stereotypes, the duo also employed a clever twist on the age-old tradition of juxtaposing classical set-lists with popular "surprises". Instead, Black Violin chose to slip in a "surprise" Brandenburg Concerto for good measure---but not before executing a faster-paced, minor key, remixed expansion on the familiar theme. The success and deference with which the audience regarded these performances exhibited how Black Violin has carefully forged a set list that caters to the diverse and satiates the homespun, while challenging the same.