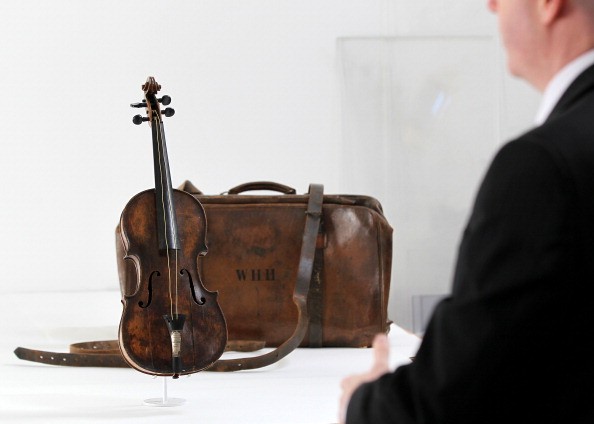 The violin played by bandmaster Wallace Hartley during the final moments before the sinking of the Titanic is displayed with a leather carrying case initialed W H H at a conservation studio in Lurgan, Northern Ireland, on September 16, 2013, before going on public display at the Titanic Belfast. (Photo : PETER MUHLY/AFP/Getty Images)

Among the noblest stories re-told from the sinking of the Titanic is that of ship violinist Wallace Hartley and his band's commitment to "play on" while the ship sank around them.  Although there's no way to know for sure just how long the band played, several accounts claim it was right until the very end. Indeed, most adaptations of the Titanic story have perpetuated the legend, because let's face it: it makes for some great cinema.  What may surprise people, however, is that Hartley's famed violin is confirmed to exist, in reasonable condition, and will be placed on display at two U.S. Titanic Museum Attractions in 2016.

Despite an overwhelming 103 years since the event, the evidence to suggest that the violin belonged to Wallace Hartley is actually very credible.  Historian Stuart Kelly followed the story of how Titanic Auctioneers Henry Aldridge & Son confirmed the violin's origins.  It began with the crew of the Mackay-Bennett, a vessel sent to the Titanic's last known position (a full 10 days after its sinking) with the ghastly task of fishing out floating bodies and debris.  As Kelly attests, the ship did not report that a violin had been recovered, although the body of Wallace Hartley was certainly recovered with several newspaper reports from the time claiming it had been found with a satchel firmly strapped over his lifejacket, initialed "W.H.H."  Auctioneers Alan & Andrew Aldridge later confirmed that the metallic pieces on the violin were "consistent with immersion in seawater." 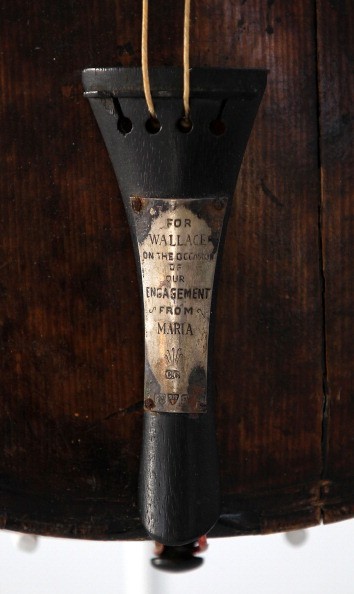 (Photo : PETER MUHLY/AFP/Getty Images)
The violin played by bandmaster Wallace Hartley during the final moments before the sinking of the Titanic is displayed at a conservation studio in Lurgan, Northern Ireland, on September 16, 2013, before going on public display at the Titanic Belfast.

The next leap in the violin's journey is the mystery of how it found its way back into the possession of Hartley's fiancée, Maria Robinson (who had originally given him the violin as an engagement present).  The silver "fish plate" attached to the violin's tailpiece reads, "For Wallace, on the occasion of our engagement ~ From Maria" and has been confirmed "authentic beyond reasonable doubt" as an original attachment. As to how Maria re-acquired the violin, the answer is provided (as reassuringly as it is vague) in her own diary, with a telegram transcript from 3 months after the sinking reading: "I would be most grateful if you could convey my heartfelt thanks to all who have made possible the return of my late fiancée's violin."

The death of Maria Robinson in 1939 forced her sister, as executor of her estate, to pass the belongings onto a Salvation Army bandmaster who then gifted the violin to a violin teacher.  That violin teacher, who declared the violin unplayable, then gifted it to one of his pupils, whose son ultimately sold it to Alan & Andrew Aldridge.

After a 7-year analysis of the violin to confirm this history, using CT scans and various tests, the auctioneers will finally release the violin for public viewing.  At last, as long imagined by Titanic enthusiasts, the instrument said to have played "Nearer, My God, to Thee" just before the ship sank---the last piece of music heard by more than 1,500 people---is now a tangible facet of history.