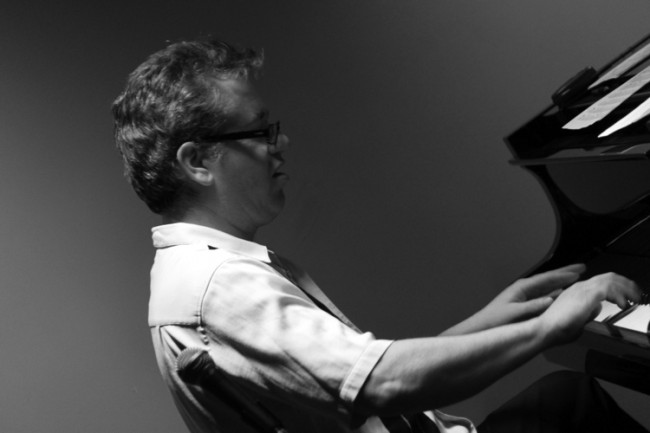 Known primarily for his work on the Hammond B-3 organ, Midwestern keyboardist Dan Trudell Plays The Piano on the new self-released CD by The Dan Trudell Trio. Besides two originals, they interpret the compositions of such pianists as Duke Ellington ("I Let A Song Out Of My Heart") which rambles on for over eight minutes, Stevie Wonder ("Isn't She Lovely"), Alicia Keys ("The Worth Of A Woman") and Horace Silver ("Soulville").

Trudell is always entertaining. He brightens it up every time with humor, funky asides and intuitive chemistry with drummer Matt Wilson and bassist Joe Sanders, heavyweights both. Even Harold Arlen's 1942 "That Old Black Magic" is born anew in a jam-band worthy 10:51. The same goes for Frederic Loewe's 1960 "If Ever I Would Leave You" from Broadway's Camelot. His two originals are in tribute to two of his pianistic inspirations: "Jonesin'" for Hank Jones [1918-2010] and "McCoy For Now" for McCoy Tyner.

The stand-out has to be the Keys number. Originally fluff, Trudell imbues her melody with constant harmony and almost telepathic interplay with his mates. (Drummer Wilson has been off and on with him for the better part of 25 years.)

Born and raised in Michigan, Trudell transferred to North Texas State to seriously study piano. He graduated, played piano on cruise ships, and ended up in Boston leading his first trio. In 1990, he moved to Chicago to join Sabertooth, a quintet of progressives which wound up expanding his chops enough for him to get selected by the prestigious Chicago Jazz Orchestra (the Kennedy Honors band). He also formed the popular B-3 Bombers with well-known funkster drummer Clyde Stubblefield.

Now living in a house overlooking Wisconsin's Lake Geneva, he performs regularly in the Grand Geneva Lobby Bar. Stop in and see him if you're in town. Tell him I sent you. And don't forget to stuff a dollar in the glass.