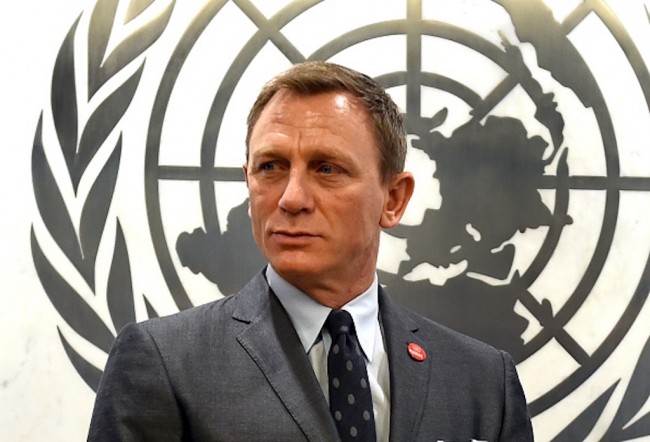 Actor Daniel Craig, who was named as the UN Global Advocate for the Elimination of Mines and Explosive Hazards at the United Nations in New York on April 14, 2015. (Photo : Timothy A. Clary/Getty Images)

Making for an Off-Broadway bill worth the price of admission, Daniel Craig and David Oyelowo will be starring in a production of Othello next season. The duo will take on the major roles--Oyelowo as the protagonist and Craig as Iago.

The British movie stars have both made headlines with their performances in last years blockbusters (Oyelowo in Selma). Mr. Craig, obviously, is the face of Bond brand and will be coming out with a new secret agent action flick Spectre as part of said brand.

As of now, the play will be staged by New York Theater Workshop, a small nonprofit that wants to present the work in an unconventional 199-seat theater for a limited run in the fall of 2016. Dates and duration have not yet been announced.

According the New York Times: "The starry cast was assembled and offered to New York Theater Workshop by one of New York's most in-demand directors, Sam Gold, who this year won the Tony Award as best director for his work on the musical "Fun Home," and who is also known for his fruitful and frequent collaboration with the Pulitzer Prize-winning playwright Annie Baker. Mr. Gold's career has been built largely on the direction of new work; Othello will be the first time he has professionally directed a play by Shakespeare."

Believe it or not, Mr. Craig is also a noteworthy stage actor. He has appeared twice on Broadway as part of A Steady Rain (2009) and Betrayal (2013) and told DuJour magazine that he wanted to do more stage acting but not in a Broadway setting.

Thus, the Off-Broadway shoot is a perfect venture for Craig as he takes a breather between movies.

Classicalite's siste site, MStars News, recently caught some words with the future Othello heavyweight. Having portrayed Martin Luther King, Jr. in the Oscar-winning Selma, Oyelowo talked everywhere from the meaning behind his name to his work on Nightingale.

Check out the interview here and be sure to preview his chops below.