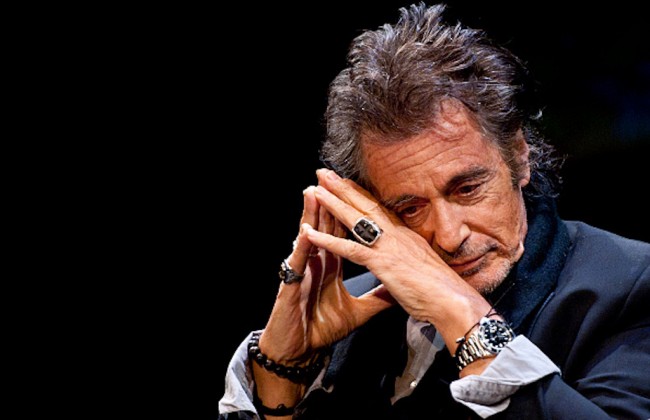 Actor Al Pacino during An Evening With Al Pacino at Eventim Apollo on May 22, 2015 in London, England. (Photo : Eamonn M. McCormack/Getty Images)

Legendary actor Al Pacino has been tanking in the Broadway production of China Doll. David Mamet's play, unfortunately, has seen the artist forgetting his lines and requiring teleprompters to aid him in keeping the performance afloat.

It's been reported that the show has become a disaster as per New York Post's Michael Riedel. He writes that Pacino is often oblivious, staring at prompters for a lot of the time.

It's also been noted that Pacino is fed some of his lines via a Bluetooth headset in order to perform the role adequately.

As Riedel writes: "Pacino must shoulder some of the blame for what's unfolding at the Schoenfeld, where the show opens on Nov. 19. Sources say he's struggling with his lines, and several teleprompters are embedded in the set. Two are behind columns on either side of the stage; a third is behind a couch. Pacino also spends a lot of time starring at a laptop computer 'reading his lines,' a source says."

Friends of the actor have also said that Pacino appears to be despondent when not on stage, going insofar as to say that after performances he sits in his dressing room, "totally lost."

While the play may be ill received, the numbers show otherwise. The play has grossed almost $1.1 million over six preview performances. The New York Times notes that the play has been leading the box office (most likely because many haven't gotten a word in yet about Mr. Scarface himself).

It seems that the world-renowned actor may be falling into his old age, but that shouldn't overshadow his accolades or merits as an actor of stage and film.

Don't lose sight of him just yet. Here is Pacino in his younger years, not forgetting his lines.