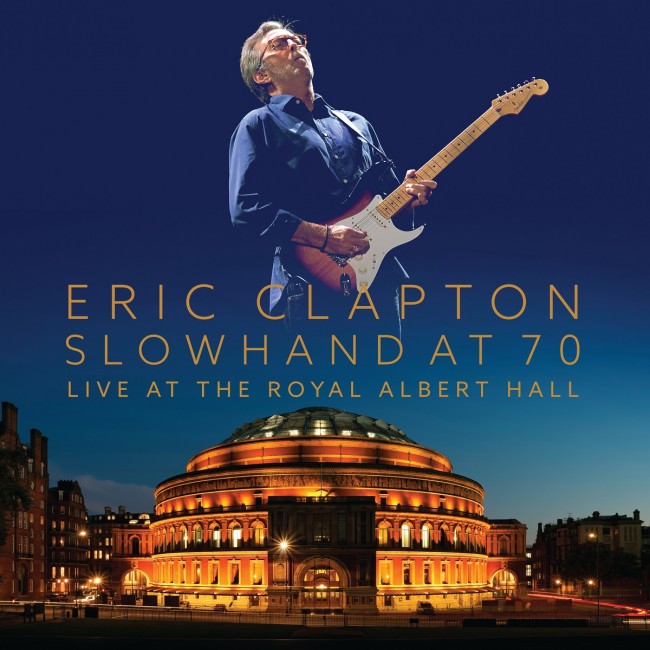 So "God" is 70. Damn, where have the years gone? Eric Clapton first played the Royal Albert Hall in London a half-century ago with The Yardbirds. For his 200th appearance at this most prestigious venue, celebrating his big 7-0, the seven-night run from which Slowhand At 70: Live at the Royal Albert Hall (Eagle Rock Entertainment) is taken, contains plenty of good blues as well as classics from Derek & The Dominos, Blind Faith, Cream and his solo career on two CDs and one DVD.

His still stinging electricity buoys an allstar band that includes Squeeze/Roxy Music keyboardist Paul Carrack (who gets to croon Billy Preston's "You Are So Beautiful"), drummer Steve Gadd, keyboardist Chris Stainton, bassist Nathan East and guitarist Andy Fairweather Low (who belts out "High Time We Went," a song Stainton wrote with Joe Cocker to close things out on one hell of a rampaging note).

Opening with JJ Cale's "Somebody's Knocking On My Door" and Big Bill Broonzy's "Key To The Highway" (his vocals offset by creamy female back-up oohs and aahs), the sound is studio-spectacular with crowd noise kept to a minimum for maximum enjoyment. Willie Dixon's "Hoochie Coochie Man" and Bob Marley's "I Shot The Sheriff" are the other stand-outs from Disc #1. Disc #2 opens with Charles Brown's classic "Driftin' Blues," runs through Robert Johnson's "Little Queen Of Spades" and "Crossroads" but it's "Let It Rain," a song he wrote with Bonnie Bramlett of the much-missed Delaney & Bonnie, that carries the night in delicious fashion. JJ Cale's "Cocaine" precedes the closer on a funky swamp-rock note.

The package comes complete with a DVD containing performances from Cream's original 1968 farewell on through shows from 1990, 2004, the 2005 Cream reunion and 2010. May he rock on forever.