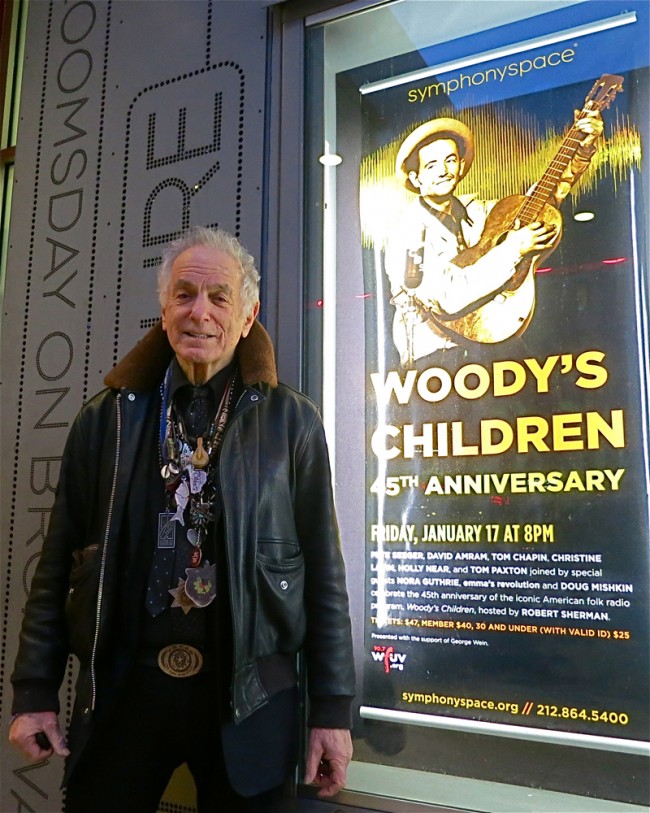 This Land (Newport Classic Recordings), subtitled "Symphonic Variations On A Song By Woody Guthrie," is by the living legend known as David Amram, who, now 85 years-old, has conducted 75 of the world's greatest orchestras. A friend to Kerouac, Ginsburg, Dylan, Seeger and, yes, Guthrie...composer-in-residence at the New York Philharmonic since 1966...pioneer of the French Horn in jazz since the 1950s...a world music, folk, classical and jazz icon.

"This Land Is Your Land" by Woody Guthrie should be America's National Anthem instead of that war song that's too hard to sing. On This Land, Amram conducts the Colorado Symphony Orchestra, featuring flute soloist Brook Ellen Ferguson in a sweepingly gorgeous montage of six variations. Starting with "Oklahoma Stomp Dance," continuing with "Sunday Morning Church Service in Okema" (Woody's birthplace), "Prelude and Pampa Texas Barn Dance," "Dreaming of Mexico," "Dust Bowl Dirge" and "Street Sounds of New York's Neighborhoods," Amram touches all the bases of this home run of a CD. This last variation is broken into four parts: "Caribbean Street Festival," "Klezmer Wedding Celebration and Middle Eastern Bazaar," "Salvation Army Hymn" and "Block Party Jam and Finale." The CD ends with the magnificent "Theme and Variations on Red River Valley for Flute and Strings." ("Red River Valley" is said to have been written in 1879 and now stands in the Public Domain.)

Amram boils This Land into a big soup to make a symphonic gumbo of polka, Celtic, gospel, Latin, Tex-Mex, Cajun, Appalachian mountain music and Jewish jazz (klezmer). Somehow, all of these disparate elements combine into a frothy entertaining, endearing mix that is totally delightful and accessible not only to all ages but to all kinds of people. It's a hodge-podge of different ethnicities and cultures...just like America herself.

TagsDavid Amram, Woody Guthrie, REVIEW, This Land is Your Land