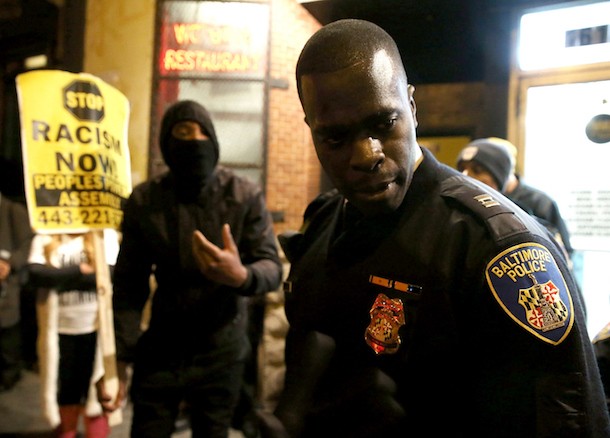 Baltimore Police Captain Robert Jackson listens to a protester at the site of last Aprils riots after todays mistrial in the trial of Baltimore police Officer William G. Porter, December 16, 2015 in Baltimore, Maryland. The judge declared a mistrial on third day of deliberations in PorterÕs trial, which is the first of six trials of police officers involved in the death of Freddie Gray. (Photo : Mark Wilson/Getty Images)

The Baltimore Sun cited an interview with BBC News earlier this week in which Alsop said to reporter Razia Iqbal, "It's heartbreaking that we haven't dealt with these issues, that it requires violence, which I think it does require, to be honest, to change this equation."

But Alsop's remark was in context with Iqbal's interpretation of Baltimore as portrayed by the media. Iqbal noted the show The Wire as an statement of the city as a place where "young African American men [are] being gunned down by the state."

When Baltimore exploded with a series of riots pitting police officers against the black community, Alsop also mentioned that it was a "starting point for healing" and was inevitable with the intensifying racial climate pervading the city.

Her statement, though, comes with a solution. Obviously, the director has helped shape an image for female conductors abound she also founded the OrchKids program, which provides opportunities for children in the city. In an earlier interview with The Economist, Alsop remarked that while it is heartbreaking and terrifying, it's not surprising. She said, "I decided that we needed to be part of, not 'a solution' necessarily, but rather 'a creation' for young people."

She concluded, "Music can be a refuge and a pathway, so we started an after-school program with thirty children."

In addition, the Alsop and the BSO responded to the riots by putting on a concert for peace at Mondawmin Mall within 36 hours of the hearing the news.

Alsop will continue to help the city of Baltimore with the BSO. Check out her and the orchestra in a performance below.