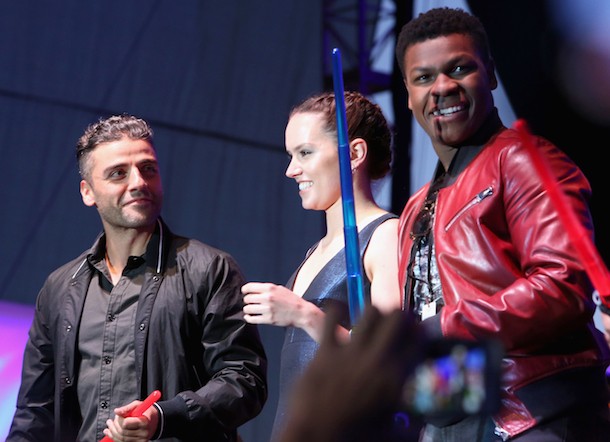 There are plenty on nuances in Star Wars: The Force Awakens that are telling of characters and their back stories. Perhaps none more telling is John Williams' underlying score that provides a unique insight into each persona through theme music.

If you have seen the film (and let's face it, you should have by now) then you were witness to new additions to the Star Wars universe and its ever-expanding cast of new faces. The most recognizable to date is, of course, Kylo Ren as played by Adam Driver.

Ren, who is this generation's Darth Vader, is accompanied by his own theme music. But, while the "Imperial March" is hard to rival, Ren's anthem may convey more to his character than a just a bad ass song to walk out to.

Williams commented in an interview about composing the leitmotif:

"There's a more ruminative part that is usually done softly. I don't think it portrays any particular weakness, but possibly hesitancy. But then there's the motif that's often strong, that seems to be the embodiment of evil. I thought that it should be a relative of Darth Vader, but also something entirely different in terms of melody."

Another character introduced is the origin-less Rey, who is one of the only personas Williams composed an entire arrangement to be performed in concert. Per a list conjured up at Mashable, Rey's theme, "May sound tentative during her solitude on Jakku, but it gradually takes on more emotional depth and eventually conveys real heroism."

There are more faces that were also given their own unique musical color, including the adroit pilot Poe Dameron (Oscar Isaac), Finn (John Boyega) and so on.

Be sure to take a glimpse at the list and if you haven't already, check out some of the music below.

'Star Wars 7' Rumors: Why the Jedi are Still a Legend in 'The Force Awakens'