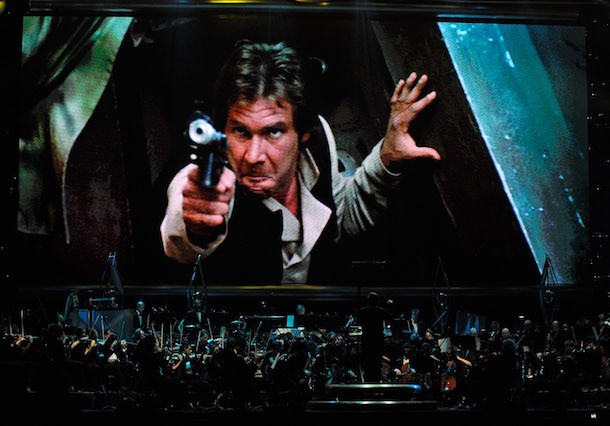 Actor Harrison Ford's Han Solo character from 'Star Wars Episode VI: Return of the Jedi' is shown on screen while musicians perform during 'Star Wars: In Concert' at the Orleans Arena May 29, 2010 in Las Vegas, Nevada. The traveling production features a full symphony orchestra and choir playing music from all six of John Williams' Star Wars scores synchronized with footage from the films displayed on a three-story-tall, HD LED screen. (Photo : Ethan Miller/Getty Images)

With Star Wars: The Force Awakens taking over all thought, fans have been revisiting the franchise in its entirety. In an effort to continue the nostalgia, New York's beloved One World Symphony, and its creator Sung Jin Hong, have created a list of Star Wars doppelgangers, comparing history's greatest composers to characters from a galaxy far, far away.

Comparing history's Western composing elite to the echelon of Star Wars mega-heroes and villains is no easy task. Take the first comparison, Mr. Leonard Bernstein and bad boy Han Solo. While it may not seem applicable, there's a correlation that's hard to deny once you take the time to read the quotes.

Interesting indeed, and the list continues with more comparisons, including a debatable but certainly valid likening of Darth Vader to classical prodigy Wolfgang Amadeus Mozart.

A child prodigy of supernatural origins, Anakin was prophesied to bring balance to the Force. Did Borderline Personality Disorder and abandonment/ daddy issues make him vulnerable to be seduced by the dark side?

'I find your lack of faith disturbing.' - Vader

We don't want to spoil the list here so make sure to visit One World online and take a gander for yourself.

If you don't know One World Symphony, they are one of the premier local ensembles in the area. Their conductor and composer Sung Jin Hong has a penchant for taking pop culture and bringing it into the realm of classical. His latest installation, Hannibal, takes the sociopathic madman Hannibal Lecter and gives him an operatic voice, one suitable for the stage and any concert venue in the city and perhaps the world.

Sung Jin Hong, yes, has an unbound love for all things Star Wars and his list reflects his passion immensely.

While you check out the list, be sure to preview a trailer for Hannibal by One World below.