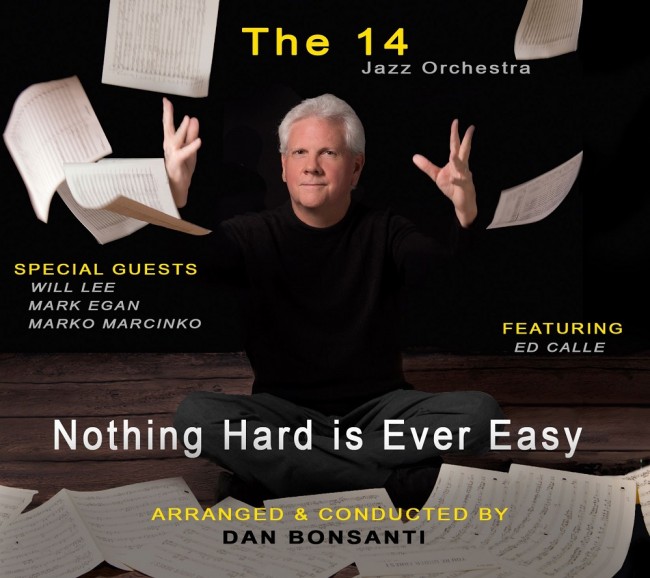 Dan Bonsanti arranged and conducted The 14 Jazz Orchestra on 'Nothing Hard is Ever Easy.' (Photo : courtesy Dabon Music)

Florida's 14 Jazz Orchestra has been wowing them on South Beach since 2013. For its auspicious CD debut under the direction of arranger and conductor Dan Bonsanti, Nothing Hard Is Ever Easy (Dabon Music) tackles a mélange of genres from gospel, rock and swing to soul, fusion and bebop.

No expense was spared to get just the right sound and players for this project. That's why Fab Faux bassist Will Lee is a guest on Lennon/McCartney's 1967 "With A Little Help From My Friends." Guess what? The tune works in a Big Band jazz format. So does the Ray Charles hit, "Hit The Road, Jack." Chick Corea's "Windows" and Joe Henderson's "Black Narcissus" are both done as waltzes. The Reverend Thomas Dorsey's classic "Take My Hand, Precious Lord" is so dramatic--what with the escalating magnificence of Peter Brewer's baritone sax solo and Ray Chicalo's trumpet solo--that it stands out as the #1 highlight of a CD stuffed with highlights.

Then there's Jaco. Just in time for the flurry of interest in the doomed legendary electric bassist of Weather Report Jaco Pastorius, his "John and Mary" is interpreted in half-ballad/half-Caribbean flavors. Weather Report's "Palladium" also resonates with Jaco's ghost hovering over the mix. Closer "You're Under Arrest," written by guitarist John Scofield for Miles Davis, takes the party out on a heavily syncopated note.

The 14 Jazz Orchestra is manned by alumni of the University of Miami: all four reeds (which include guest Ed Calle), two trombones, three trumpets and the four-man rhythm section. Even Will Lee. Arranger/conductor Bonsanti has done a masterful job pulling together these disparate elements be it Billy Strayhorn (opener "U.M.M.G.") or Charlie Parker ("Donna Lee [In Disguise]").

The 11 tracks are spread out over an action-packed 79 minutes so everyone gets their licks in. Play it loud and be blown away.