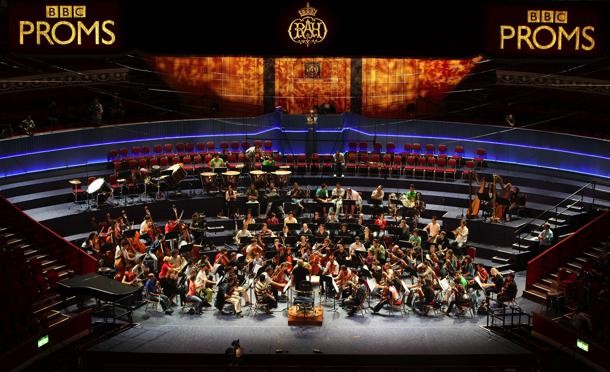 Musicians of The West-Eastern Divan youth orchestra, conducted by Daniel Barenboim rehearse in the Royal Albert Hall ahead of their performance in the BBC Proms tonight on August 21, 2009 in London, England. (Photo : Photo by Oli Scarff/Getty Images)

The always-inspiring BBC Proms---the eight-week series of summer classical concerts held in the Royal Albert Hall---has announced that it will continue its popular Ten Pieces concerts, which, last year, aimed to bring primary school children in contact with classical music. The initiative was held to be a success for young audiences in 2015, and now the BBC Proms 2016 intends to continue the "new tradition" by encouraging secondary school students to respond to a selection of ten classical pieces in a manner in which they see fit. The two-day event will see a performance of the ten pieces by the BBC Philharmonic, conducted by Alpesh Chauhan, alongside the students' work.

BBC Proms 2016's Ten Pieces concerts present a fresh way to re-popularize classical music among U.K. students, one that places all manners of appreciation and interpretation in the hands of the students themselves.  Like last year, upon listening to the selection of pieces the secondary school students will be asked to tap into the music on a primal level, to react creatively, and then submit their results to the BBC on the Ten Pieces concert website.

Suggested categories for the Ten Pieces concert submission include composing a piece of music, choreographing a dance routine, rendering a piece of digital art or animation, and even presenting performance poetry. Despite tasking the secondary school students with higher levels of creative thought than the primary student crowd, all told, within these fields the student is in full creative control.

Submissions will be accepted through March 24th for consideration in the BBC Proms 2016 Ten Pieces concert (which will be held on July 23rd and 24th), although students will have until May 27th for their submissions to be included on the BBC Ten Pieces web showcase. (Last year's showcase can still be accessed).

The ten pieces set before the secondary school students are available in the playlist below:

Commissioned by the BBC Proms: An Historical Playlist