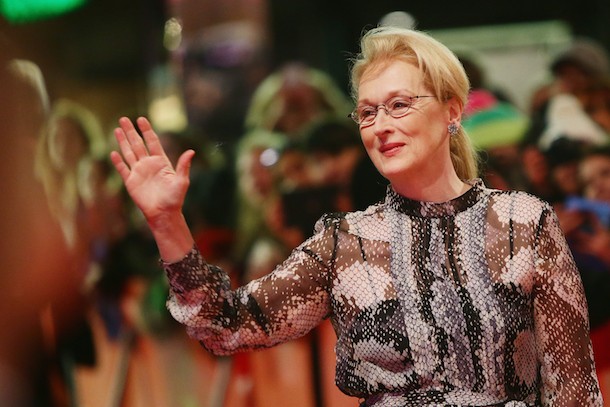 It was announced in 2014 that Paramount acquired the rights to the biopic Florence Foster Jenkins starring Meryl Streep and Hugh Grant. The film receives its debut in U.K. cinemas on May 6 and tells the story of a beloved-yet-terrible opera singer.

The film is a comedy starring Grant and Streep and is directed by Stephen Frears. Also on the actors log is Simon Helberg, Nina Arianda and Rebecca Ferguson. Streep will star as the singer, Florence Foster Jenkins, with Grant opposite as her husband and longtime manager, St. Clair Bayfield.

If you aren't in the know about Ms. Jenkins, the singer was a New York heiress with a penchant for singing opera. While the voice she heard may have sounded divine, audiences didn't take to her singing like she might have hoped.

It wasn't until her debut concert at New York's Carnegie Hall in 1944 that the truth in her voice was revealed and the singer's career fell short.

An article in the Pacific Standard even wrote about her:

"Florence Foster Jenkins was, and will forever be, the worst singer to appear at Carnegie Hall. And more: She is arguably the worst singer to ever devote herself so wholeheartedly to, and fail so fully at, the craft of singing. ... She sang in public so consistently -- and so consistently badly -- that she became one of New York City's most prominent musical cult figures; since her death in 1944, she's become one of world's. The hilarity and, ultimately, the tragedy of Jenkins' story is that she remained blissfully, utterly convinced of her ability until the bitterest of ends."

Streep's role, then, will not focus solely on the tragedy of the singing heiress and her ultimate death from the backlash of her Carnegie performance. Rather, Streep's character will illuminate the perseverance of Ms. Foster and how an amateur -- despite their unique talent of being extremely un-talented -- can achieve notoriety in a cruel world.

Before the premiere, preview Ms. Foster Jenkins below.