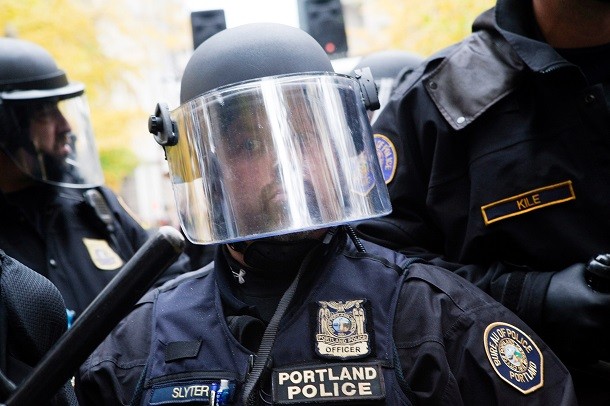 A police man in riot gear watches as protesters continue to chant slogans and sing songs near the Occupy Portland encampment November 13, 2011 in Portland, Oregon. Portland police have reclaimed the two parks in which occupiers have been camping after a night of brinksmanship with protesting crowds of several thousands. (Photo : Natalie Behring/Getty Images)

Perhaps not all pot-users are junkies, but former St. Paul Chamber Orchestra cellist David Roy was arrested this week after being discovered with more than 100 pounds of marijuana in his car. The marijuana, police say, could have sold for upwards of $226,000.

David Roy Huckaby, 33, was detained on Friday in Oregon after a trooper pulled the musician over at about 12:15 p.m. for speeding. Once to the side, the officer searched the car to unfurl a trunk load of pot totaling to about 113 pounds.

Speaking to the character of Mr. Huckaby, and orchestra spokesman said in a statement:

"He is a gifted musician and was actively involved in the SPCO's community engagement and education initiatives. He left the organization in good standing at the end of the 2013-14 season."

Mr. Huckaby joined the SPCO in 2009 after graduating from the Juilliard School with a master's degree. He took an indefinite leave of absence in 2013 which resulted in his full resignation a year later.

As of late, Huckaby had gone west not to indulge in the "green rush" that is sweeping states with legal jane but instead to be a substitute cellist. He held the title of substitute cellist, also, with the Detroit Symphony once before.

And while he may have been arrested in Oregon, David Roy resides in California.

The charges levied against Mr. Huckaby include unlawful possession and distribution of marijuana. Oregon is on the bandwagon with other states in the U.S. that has legalized the recreational use of marijuana.

The legalization took effect in late 2014 and has since nearly eradicated all felony counts for possession.

Mr. Huckaby's latest stint with the law may harsh his vibe but at least the state of Oregon doesn't appear to be throwing the book at him.

Check out the St. Paul Chamber below.