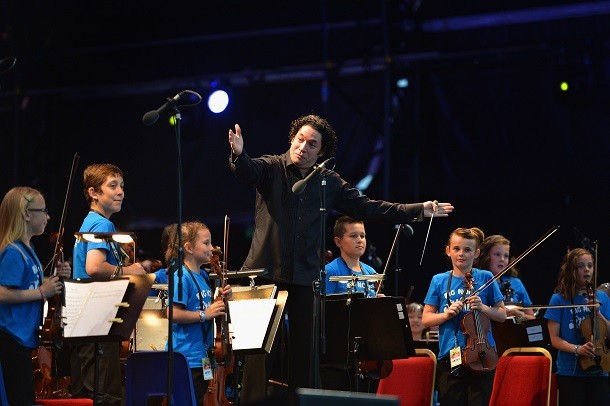 Maestro Gustavo Dudamel conducts the children from the Big Noise Orchestra during the Big Concert on June 21, 2012 in Stirling, Scotland. The Big Concert is the opening event of the London 2012 festival. The special outdoor event set against the backdrop of Stirling Castle, features a full performance by lead by conductor Gustavo Dudamel and the Simon Bolivar Orchestra of Venezuela. (Photo : Jeff J Mitchell/Getty Images)

The Venezuelan Orquesta Sinfónica de Falcón was held at gunpoint this week while two men robbed members of the symphony and took off without any indication of their destination.

Law and order are merely a guideline in Venezuela as news of a robbery involving a Venezuelan orchestra company surfaced. In a translated NotiFalcon article, it's been reported that the musicians were only robbed of their cash and phones and that no one in the company was harmed.

When the assailants sieged the Harmony Choir theater, orchestra members were forced into the basement and told to leave their wallets and cellulars for the robbers.

Venezuela may be a lawless country but news of the robbery still resonates with horror as the incident could have escalated to homicide.

The Orquesta Sinfónica de Falcón was founded in 1992 by a group of first generation graduates from the Youth Symphony Orchestra. Under the direction of maestro Maiolino Conte and Abraham Guanipa, the symphony aims at accommodating high artistic integrity with an orchestra to match.

Since January 2004, the orchestra now operates under the tutelage of Artistic Director Teresa Hernández Vega. The company consists of 90 musicians and aims at providing audiences with special performances each and every concert.

"The orchestra creates opportunities for social and cultural development of communities falconianas, encourages the pursuit of individual and collective excellence of all members of orchestras and future generations; supports, promotes and spreads knowledge and values ​​the regional, Venezuela, Latin American and universal music as heritage of all citizens."

It's most fortunate that none of the orchestra members were harmed during the theater invasion. Nonetheless, the attack proves that any kind of organization is susceptible to the nature of violence.