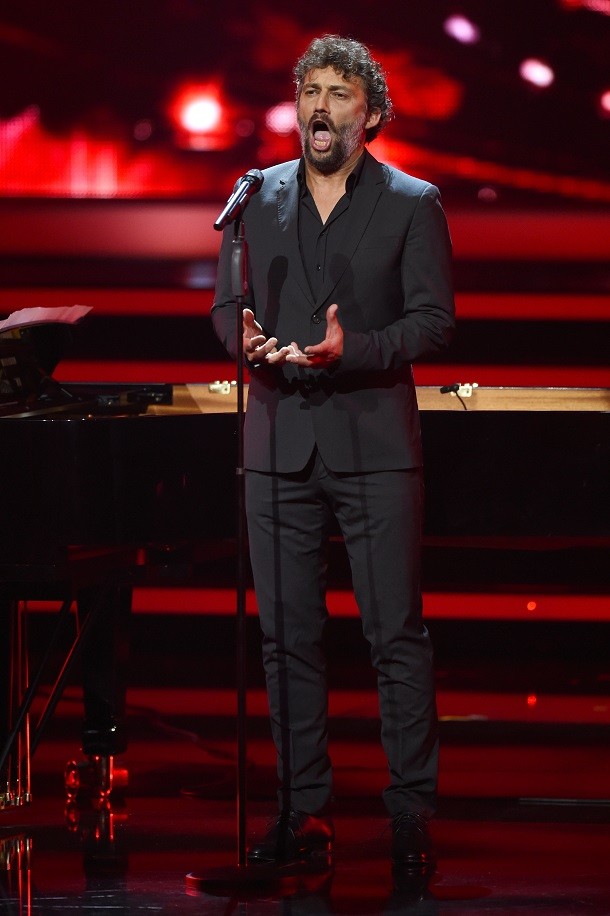 You know the name, Jonas Kaufmann, the world's best (and hottest) operatic tenor. In an intimate performance by the singer, his Evening with Puccini concert will be showing in select U.S. theatres tomorrow, Feb. 23 at 7:30 p.m. via Fathom events.

A special one-night opera event, it will be an evening to remember as Puccini is one of Kaufmann's all-time beloved composers. Having released several tributes to the Italian songwriter, Kaufmann is a renowned enthusiast of Mr. Giacomo and his unparalleled arias.

To wit, Kaufmann last year released Nessum Dorma: The Puccini Album, which featured Kaufmann's soaring voice over his personal Puccini selections. Also released alongside the LP was a special "Making Of..." segment in which the opera star talked about his affinity for Giacomo.

But, tomorrow's consortium isn't for Nessum Dorma, it is instead for a concert that was so astounding it received five standing ovations. Kaufmann's operatic excellence is a mastered trait, one that is only complimented by a repertoire of the singer's own choosing.

The Guardian wrote of the gala:

"It was one of opera's most celebrated performances of 2015 - Jonas Kaufmann's all-Puccini gala concert at La Scala, Milan, with arias and scenes from Turandot, Tosca, Manon Lescaut and La Fanciulla del West. 'Jonas Kaufmann conquers La Scala,' declared La Stampa. Now you can see it, when it is broadcast in cinemas in the UK, US, Canada, Australia and across Europe, and enjoy the singer the New York Times called 'the most important, versatile tenor of his generation.'"

A beautiful voice that is continually rising, it's our honor at Classicalite to premiere yet another giveaway for you operagoers. Now, two lucky winners have a chance to win two exclusive pairs of tickets to Kaufmann's Evening with Puccini screening in select theaters.

Just leave us a comment below or hashtag your response on any of your socials with #ClassicalitePuccini!

No purchase necessary to enter or win. A purchase will not increase your chances of winning.

ELIGIBILITY: Open only to legal residents of the fifty (50) United States and the District of Columbia, 18 years of age or older. Void where prohibited. Employees and their immediate families (and those living in their same households, whether or not related) of Music Times, LLC and their respective parents, affiliates, subsidiaries and advertising and promotion agencies are not eligible to enter or win. By participating, entrants agree to be bound by these Official Rules and the decisions of the judges and/or Sponsor, which are binding and final on matters relating to this sweepstakes.

HOW TO ENTER: Between 12 p.m. Eastern Time ("ET") on Wednesday, December 16, 2015 and 11:59PM ET on Thursday, December 31, 2015 (the "Entry Period"), Online: visit www.classicalite.com's article for rules. Follow @Classicalite on Twitter and retweet the article link with hashtag #Classicalite. Multiple entries will be void.

WINNER NOTIFICATION: Potential winners will be notified by Twitter direct message. Note that the applicant must be following @Classicalite on Twitter to be contacted. If sponsor is unable to contact a potential winner or a potential winner is not in compliance with these Official Rules, prize will be forfeited and, at Sponsor's discretion, an alternate winner selected. If a potential winner is an eligible minor in his/her jurisdiction of residence, prize may be awarded in the name of his/her parent or legal guardian who will be responsible for fulfilling all requirements imposed on winner set forth herein.

PRIZES: 2 winner(s) will each 2 pairs of tickets. Approximate Retail Value ("ARV") varies upon region. Prizes are awarded "as is" with no warranty or guarantee, either express or implied by Sponsor. Winners may not substitute, assign or transfer prize or redeem prize for cash, but Sponsor reserves the right, at its sole discretion, to substitute prize (or portion thereof) with one of comparable or greater value. Winners are responsible for all applicable federal, state and local taxes, if any, as well as any other costs and expenses associated with prize acceptance and use not specified herein as being provided. All prize details are at Sponsor's sole discretion.

GENERAL CONDITIONS: Released Parties (as defined below) are not responsible for lost, late, incomplete, inaccurate, stolen, misdirected, undelivered, garbled, illegible or postage-due mail, entries or email; or for lost, interrupted or unavailable network, server, Internet Service Provider (ISP), website, or other connections, availability or accessibility or miscommunications or failed computer, satellite, telephone or cable transmissions, lines, or technical failure or jumbled, scrambled, delayed, or misdirected transmissions or computer hardware or software malfunctions, failures or difficulties, or other errors or difficulties of any kind whether human, mechanical, electronic, computer, network,
typographical, printing or otherwise relating to or in connection with the sweepstakes, including, without limitation, errors or difficulties which may occur in connection with the administration of the sweepstakes, the processing of entries, the announcement of the prizes or in any sweepstakes-related materials. Released Parties are also not responsible for any incorrect or inaccurate information, whether caused by site users, tampering, hacking, or by any equipment or programming associated with or utilized in the sweepstakes. Released Parties are not responsible for injury or damage to participants' or to any other person's computer related to or resulting from participating in this sweepstakes or downloading materials from or use of the website. Persons who tamper with or abuse any aspect of the sweepstakes or website or who are in violation of these Official Rules, will be disqualified and all associated entries will be void. Should any portion of the sweepstakes be compromised by virus, worms, bugs, non-authorized human intervention or other causes which, corrupt or impair the administration, security, fairness or proper play, or submission of entries, Music Times, LLC reserves the right at its sole discretion to suspend, modify or terminate the sweepstakes and, if terminated, at its discretion, select the potential winners from all eligible, non-suspect entries received prior to action taken or as otherwise deemed fair and appropriate by Sponsor. Entrants, by participating, agree that Music Times, LLC and their respective parents, affiliates, subsidiaries and advertising and promotion agencies and all of their respective officers, directors, employees, representatives and agents (collectively, "Released Parties") will have no liability whatsoever for, and shall be held harmless by entrants against, any liability, for any injuries, losses or damages of any kind, including death, to persons, or property resulting in whole or in part, directly or indirectly, from acceptance, possession, misuse or use of any prize or participation in this sweepstakes. Each winner, by acceptance of prize, except where legally prohibited, grants permission for its designees to use his/her name, address (city and state), photograph, voice and/or other likeness and prize information for advertising, trade and promotional purposes without further compensation, in all media now known or hereafter discovered, worldwide in perpetuity, without notice or review or approval. In the event of a dispute regarding entries received from multiple users having the same e-mail account, the authorized subscriber of the e- mail account at the time of entry will be deemed to be the entrant and must comply with these Official Rules. Authorized account subscriber is the natural person who is assigned the e-mail address by the Internet Service Provider (ISP), on-line service provider, or other organization responsible for assigning e-mail addresses.

CAUTION: ANY ATTEMPT TO DELIBERATELY DAMAGE THE WEBSITE OR UNDERMINE THE LEGITIMATE OPERATION OF THE SWEEPSTAKES IS A VIOLATION OF CRIMINAL AND CIVIL LAWS AND SHOULD SUCH AN ATTEMPT BE MADE, SPONSOR WILL DISQUALIFY ANY SUCH INDIVIDUAL AND RESERVES THE RIGHT TO SEEK DAMAGES (INCLUDING ATTORNEYS' FEES) AND OTHER REMEDIES FROM ANY SUCH INDIVIDUAL TO THE FULLEST EXTENT PERMITTED BY LAW.

WINNERS' LIST: For the names of the winners, send a self-addressed stamped envelope to: 33 Whitehall Street, New York, NY, 10004 for receipt no later than December 1, 2015.