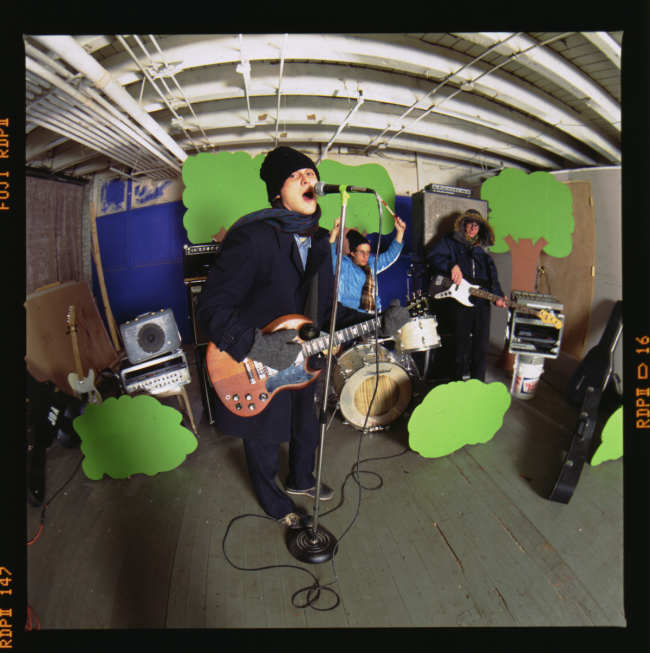 Nearly 16 years since its release, experimental indie outfit Joan of Arc's album The Gap stands the test of time. The band perfected their progressive merging of acoustic instruments with then-burgeoning advancements in recording technology, resulting in their magnum opus.

Frontman and songwriter Tim Kinsella along with his younger brother, drummer Mike, cut their musical teeth as teenagers playing in revered post-hardcore unit Cap'n Jazz. Upon maturation, the Chicago quintet went their separate ways, leaving the elder Kinsella to devise his ultimate iteration as autonomous kingpin of more esoteric, experimental works. Both Kinsella brothers would perform in the new band, but the project was to be Tim's expressive apparatus, and he remains the only permanent member.

Christened 'Joan of Arc,' Tim Kinsella's contemporary vehicle spent the latter part of the '90s releasing three albums of eclectic college rock, rounding off the decade with Live in Chicago, 1999 (which is not actually a live album). Live in Chicago revealed the group's forte as an avant-garde juggernaut, hinting at their imminent crowning achievement with eccentrically maudlin indie meeting seismically-spliced percussion and jazzy navel-gazing.

Released fall 2000 on the Jade Tree label, The Gap announces its understated grandeur with the swelling stop-start repetition of opening track, "(You) [I] Can Not See (You) [Me] As (I) [You] Can." From there, the band envelops the listener with their tour de force of organic experimentalism laced with sputtering rhythms, subdued electronics, orchestral flourishes and what sounds like a boxful of broken glass being emptied onto the floor.

Its 10 songs often flowing in and out each other, the album beguiles the Compact Disc format on which it was originally issued. Some track indexes on the CD and digital release start in the middle of an already-in-progress composition, making it unclear if the intended song title applies to the selection before or after the cut. Though this quirk is obviously less apparent on its vinyl release, it endures as just one of the many idiosyncrasies that make The Gap so endearing.

Rocketing technical improvement in those budding days of computer-based digital multitrack recording helped Joan of Arc achieve the album's excessive ends. Firmly applying the idea of the studio as an instrument, Kinsella explained to Exlaim! magazine how those then-recent technological advancements encouraged the group in tiring all of its possibilities:

"The Gap is the record it is specifically because of the shift in technology with recording. There was a shift, a blowing open of the mind. Like, 'Oh my god, you can actually make the songs on this.' And if you can make the songs on this, what isn't possible? So we just went into that record all in agreement that we were going to find our capacity for acknowledging the medium itself. We were going to work that to exhaustion."

The turn-of-the-21st-Century epic also features instrumentalists Ryan Hembrey on upright bass and Julie Pomerleau on viola and violin, lending the album a classical air that lifts selections like "Me and America (or) The United Colors of the Gap" to effervescent heights. Somehow termed "emo" on release, The Gap defies easy genre classification and creates an experimental nook all its own.

When listening to the record, it's easy to understand why legend persists that some songs on the album contained up to 100 tracks during recording. Reminiscing on the period to The A.V. Club, Kinsella recalled that the group's insular aesthetic drove them to electronically modify or alter nearly every sound they recorded:

"With something like The Gap, we were like, 'Let's smoke a ton of pot and not leave this apartment.' We each had a computer set up, and we tweaked every measure of every instrument in a different way."

Joan of Arc never quite reached the crest of The Gap again -- it's the high-water mark of their expansive catalog. After a supporting tour and follow-up EP of Gap outtakes (2001's How Can Any Thing So Little Be Any More?), the group took an extended break, as if the significance of the record deserved a sabbatical. They reconvened in 2003 and have released a dozen albums and collaborations since. The Kinsellas also released two albums with former Cap'n Jazz members as Owls.

Joan of Arc is currently touring Japan in commemoration of their 20th anniversary as a band.

Mount Eerie's 'No Flashlight' Recollected: A Flashback From the Foothills