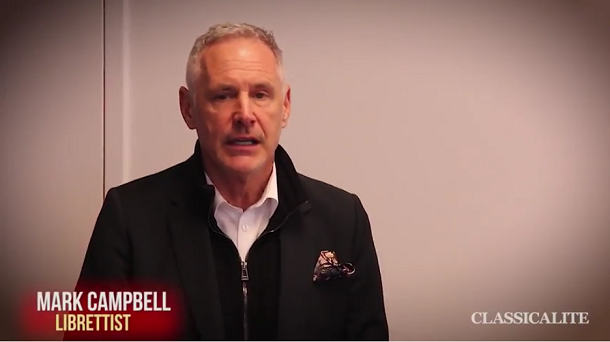 The Minnesota Opera will define what it means to adapt a novel to stage. Stephen King's best-selling text 'The Shining' will premiere with the company in May but in the meantime, Mark Campbell and some of the cast stopped by Charles MacKay Studio in New York for an early hands-on preview of the performance. (Photo : Minnesota Opera/Andy Martinez/YouTube)

But in a New York preview, in a small 4-cornered room in the Charles MacKay Studio, Campbell, along with singers Kelly Kaduce, Arthur Woodley and Brian Mulligan, presented those who sat in to listen with a mock up of what was in store for the opera this year.

The story, if you haven't read, follows Jack Torrance as him and his family settle in at the infamous Overlook Hotel. There, in deep solitude, Jack ignites his own insanity as he grapples with an inner-turmoil that is rapidly consuming him. His wife and son are vulnerable to his violent outbursts, and before their stay at the hotel ends, it's uncertain if they will ever be able to leave.

This feeling on compartmentalization, coupled with concepts of our own duality and internal struggle to keep sane, is exactly the kind of material that is utilized in this forthcoming premiere. Hitting the Minnesota floor on May 7, Mr. Campbell along with composer Paul Moravec are making strides in what it conceptual opera is all about.

As productions do, The Shining made its first previews in New York and is moving around the country to detail the intricacies of the libretto, composition and stage set up and how they all form into one, fluid piece of opera. Like it was said in the room, the stage will act as another member of the cast.

So without further ado, here is Classicalite at the preview for the Minnesota Opera's The Shining below.