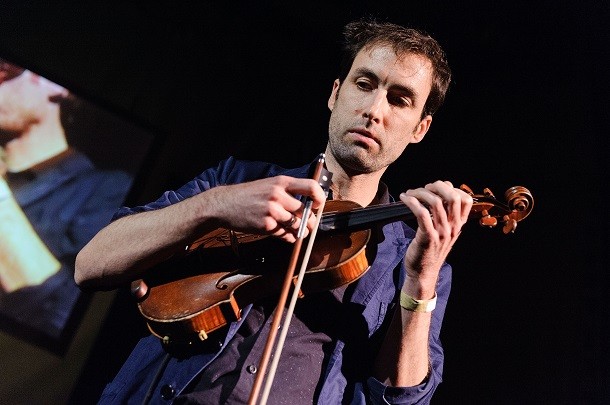 Musician Andrew Bird performs live at 'A Night Of Improvised Round Robin Duets' during the 2013 Red Bull Music Academy at Brooklyn Masonic Temple on May 1, 2013 in the Brooklyn borough of New York City. (Photo : Matthew Eisman/Getty Images)

Last month, Andrew Bird and Fiona Apple released a collaborative single entitled "Left Hand Kisses." Now, stopping by the Ellen Show, the duo performed their song for live TV with a backing band. In it, Bird plays a violin while Ms. Apple sings with a visible and believable rage.

Hitting the talk show circuit, Mr. Bird and Ms. Apple sing a duet that's both haunting and beautiful. It's perhaps Fiona's voice that makes the song so heartbreakingly believable that these are two skeptical lovers quarreling. Bird recounted in a statement posted earlier this year:

"My inclination was to write a song about why I can't write a simple love song. The song began as an internal dialogue. At first it was just my voice. Then another voice came creeping in and I thought 'this should be a duet if I can find the right person.' I needed to find someone really indicting. She was totally committed"

And as we previously reported, the song is a witty and self-aware concept that turns the lens inward, revealing that it is conscious that it is a song. Of course, the narrative resembles that of a love song but this speaker calls into question the motives of the other.

A wonderful folk song with the added quality of post-modernism, the performance was a resounding tribute to the idea of the love song and what we expect it to accomplish.