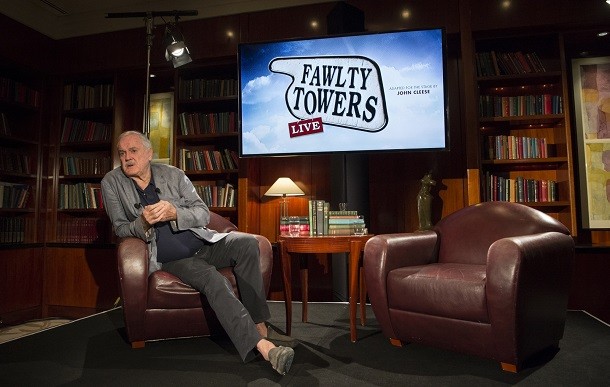 In this handout photo, Fawlty Towers creator and co-writer, John Cleese, introduced the media to Stephen Hall, who will play the role of Basil Fawlty and Blazey Best as Sybil Fawlty in the world premiere tour of Fawlty Towers-Live on stage at Park Hyatt Hotel on March 21, 2016 in Melbourne, Australia. Details of the full cast will be announced soon. (Photo : James Morgan/Getty Images)

John Cleese has lodged a few complaints regarding a "tribute" show entitled The Faulty Towers Dining Experience by Imagination Workshop. A two-hour interactive show, Mr. Cleese aired his frustrations on Twitter, slamming the company for copyright infringement and stealing his core concept for monetary gain.

As it's been reported, the Monty Python founder was recently told by a journalist that a show has been running since 1997, in which Cleese's Fawlty Towers was being used as the basis. Finding significant financial success in using the comedian's concept, name, characters and dialogue, Mr. Cleese is leaning towards a lawsuit in response to the show not paying out royalties.

I've just found out from an Aussie journalist the astonishing financial success of the 'Faulty Towers Rip-Off Dining Experience'.Had no idea

In response to Mr. Cleese's Twitter rage, Imagination Workshop was quoted as saying:

"We are staggered by John Cleese's vitriol towards us and our tribute show. He and his management have known about our show for years. We have made nothing like the sums he claims we have. We are not an unauthorised rip-off show - anyone who knows the law in this area will understand that we do not require authorisation to use the concept of Fawlty Towers. We are not the bad guys he is painting us to be. It is a shame he has chosen to air his frustrations so publicly rather than contacting us directly about this matter."

Perhaps the disagreement is as the company posits, somewhere in the realm of a misunderstanding or maybe it was simply miscommunication. Nonetheless, the comedy legend isn't taking the issue lightly. With a lofty Twitter rant and threatning legal action, Mr. Cleese is determined to seek compensation for having been neglected royalties since the production has been active.

Whatever the situation may turn into, preview the comedic superstar with a classic clip from Monty Python and the Holy Grail below for the time being.