The ‘2001: A Space Odyssey’ Soundtrack, a Monolith Remembered 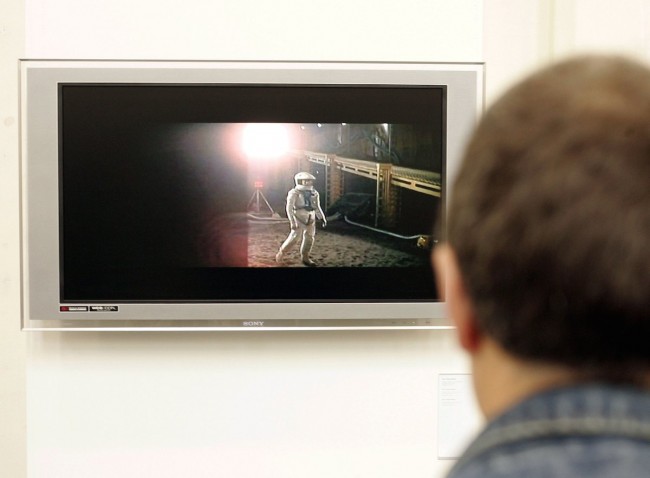 GHENT, BELGIUM - OCTOBER 14: An attendee looks at a display from the movie '2001: A Space Odyssey' at an exhibition of items from 13 movies of director Stanley Kubrick at the Caermersklooster on October 14, 2006 in Ghent, Belgium. (Photo : Mark Renders/Getty Images)

Four years in the making, the film from Kubrick and science fiction author Arthur C. Clarke was a massive undertaking. Concurrent with its production, Kubrick recruited composer Alex North to supply the picture's score. However, you won't hear this score in the movie.

Abandoning the supplied songs during the film's editing, Kubrick grew attached to more traditional pieces he had used in their place. As he told Michel Ciment in an interview promoting his 1975 film, Barry Lyndon, contemporary scores couldn't compare to the vast history of classical compositions at his disposal:

"However good our best film composers may be, they are not a Beethoven, a Mozart or a Brahms. Why use music which is less good when there is such a multitude of great orchestral music available from the past and from our own time?"

For 2001, Kubrick selected more effective and memorable airs like the first movement of Richard Strauss' now-legendary Op. 30, "Also sprach Zarathustra." The tone poem's steadily building horns and rumbling timpani are instantly recognizable to nearly any music fan. Thanks to its placement in 2001, the piece enjoyed an explosion of popularity in the '70s, even utilized by Elvis Presley for his stage introductions early in the decade.

Others in the film include the serene waltz "The Blue Danube" by Johann Strauss II and György Ligeti's chilling "Atmospheres." Most of the eight compositions on the movie's official soundtrack release are near-instantly recognizable to fans of classical music.

Alex North's unused movie score was eventually issued as recorded by Jerry Goldsmith in 1993. North's original recordings were released in 2007, and were proclaimed by most listeners as compelling selections nearly as effective as Kubrick's historical choices. Nonetheless, as BBC Music proclaimed, the magnitude of 2001 required musical accompaniment that matched the weightiness of the subject matter:

"Top of any list for sheer memorability is 2001. Arthur C's ruminations on the nature of God were always going to require more than a couple of french horns and someone banging on a kettle drum. But Stanley Kubrick showed just as much genius by collecting together these moments of transcendency as by dressing men up as monkeys and getting away with it."

The movie itself features other incidental songs excluded from the soundtrack. The quaint 1892 ditty "Daisy Bell" is made grave when vocalized by the perishing HAL 9000 computer at the film's climax. This scene was a reference to real events at the dawn of the Information Age, when an IBM computer at Bell Labs was programmed to sing the tune in 1961 -- one of the earliest displays of computer speech synthesis.

The original 2001: A Space Odyssey (Music from the Motion Picture Sound Track) LP is highly recommended to all fans of classical music. The compositions therein, performed by the Vienna Philharmonic, the Bavarian Radio Orchestra and others, are some of the most substantial orchestral recordings ever put to tape.

Sci-Fi Films Dominate the Chicago Symphony Orchestra‘s “At the Movies” Series: ‘2001: A Space Odyssey’ and ‘Metropolis’