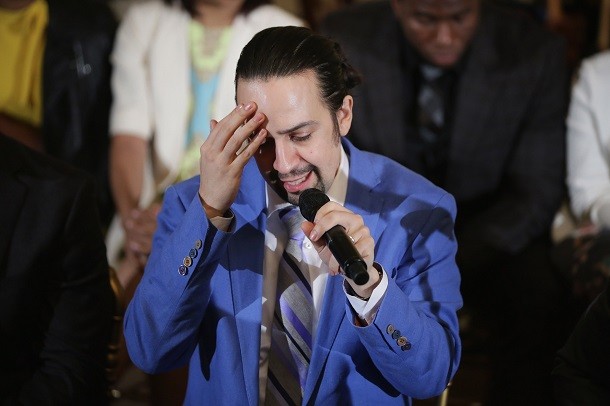 Miranda has received a lot of press as of late for his Broadway phenom production Hamilton, a tribute to the life and legacy of one of America's founding fathers. Hamilton, who was born and raised on the island of St. Croix in what is now the U.S. Virgin Islands, penned a letter on Aug. 31, 1772 about his first-hand experience with a devastating hurricane.

He wrote to his countrymen:

"O ye, who revel in affluence, see the afflictions of humanity and bestow your superfluity to ease them. Say not, we have suffered also, and thence withhold your compassion. What are your sufferings compared to those? Ye have still more than enough left. Act wisely. Succour the miserable and lay up a treasure in Heaven."

In borrowing Hamilton's words for his own state's plight, Miranda appropriated the same idea to his fellow humans in the U.S., beseeching the "elected officials and policy makers" to act.

He buttressed to his point the facts about Puerto Rico: more than 150 schools have closed; two wings and 40 rooms at San Jorge Children's Hospital have closed; nearly a doctor a day leaves the island; and its working class are emigrating daily.

A mass exodus would obviously further the island's economic decline, with its foundation seemingly breaking apart as the working class continues to dissipate.

Citing childhood memories and implicating Puerto Rico's 3.5 million citizens into the argument, Miranda asks U.S. officials to restructure the state's debt. He also went on to implicate that Puerto Ricans have no voice in elections and cannot vote for representatives-- and having no representative for themselves.

Puerto Rico's financial crisis continues to grow as the U.S. falters on making a decision. That hasn't prevented Mr. Miranda's letter from circulating the internet and being posted to none other than The New York Times, though.

While Miranda presses on with the issue, preview his already-legendary Broadway musical Hamilton below.