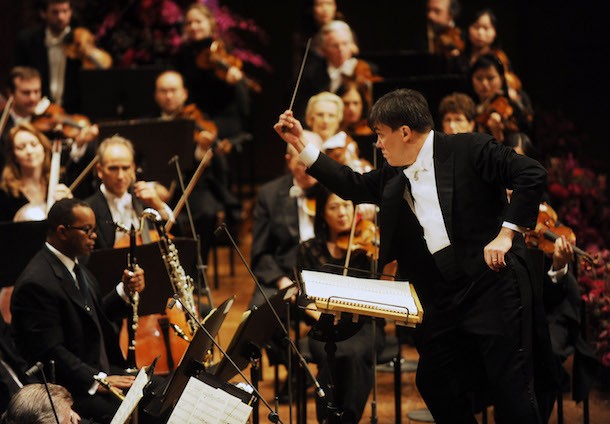 Alan Gilbert will lead the New York Philharmonic in a 4-night engagement of Brahms with a world premiere from Frank Krawczyk entitled 'Apres.' His last season, Gilbert and the orchestra will feature cellist Carter Brey as the soloist for the evening. (Photo : Stephen Lovekin/Getty Images)

The concert will also feature a world premiere by Franck Krawczyk entitled Aprės along with Schumann's Cello Concerto. For Kawczyk, his revered piece was part of a Henri Dutilleux commission with two other composer.

According to the NY Phil website, the performance was written up as:

"'Cheerful and sweet' is how Brahms described his Second Symphony, written on the shores of a lake 'with melodies flying so fast that you need to watch that you don't step on any of them.' One such melody: the lullaby we all know and love. Also on the program: Schumann's lyrical Cello Concerto with Principal Cello Carter Brey as soloist, and a premiere inspired, in part, by Beethoven."

This season will be Alan Gilbert's penultimate as it's been confirmed that he will step down from his post with the company to make way for Dutch conductor Jaap van Zweden. Having served as music director since 2009, this season will be emotional for the New York Philharmonic's loyal fandom.

As is par for the company's programming, opening night for the concert will be preceded by an open rehearsal scheduled for 9:45 a.m.

The Brahms and World Premiere concert will premiere a four-night engagement from April 27-30 with a running time of one hour and 45 minutes. A matinee performance will take place on Friday, April 29 at 2 p.m. Tickets range from $29-134 and can be found here.

While the concert being one of Gilbert's last for this season and next, the evening should be an intimate setting for one of Brahms' most iconic pieces in the classical canon.

But don't take our word for it, catch a preview of the piece below before you purchase your ticket.