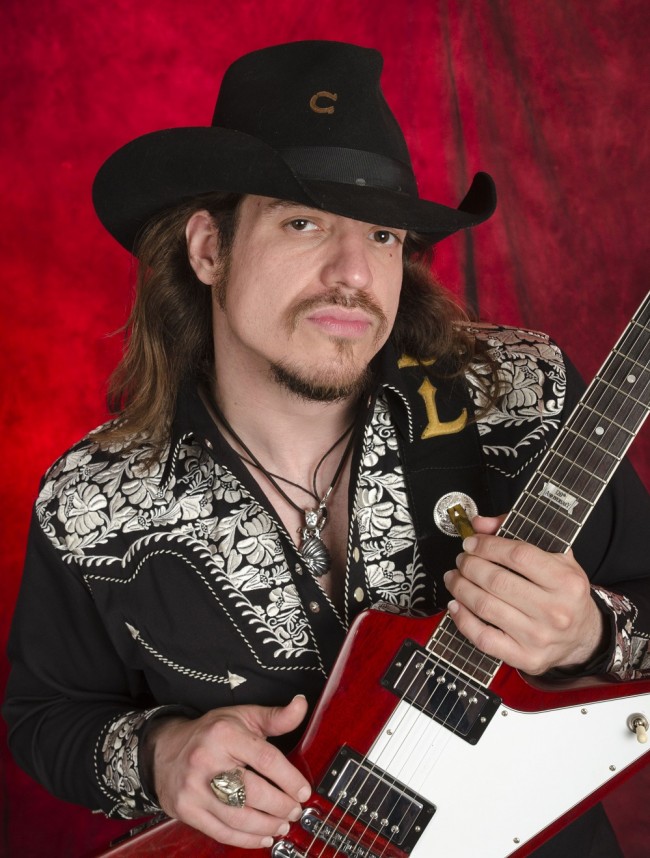 When rock'n'roll first sprouted regionally in 1950s New Orleans, New York City, Memphis and a few other towns, the new music liberally borrowed from the blues. As rock mutated into prog, metal, glam, fusion, punk, etc., something was lost along the way, at least for those who were there at its inception...when it was dangerous...when parents hated it...when preachers reviled it and kids loved it. I mean, geez, that's the way it's supposed to be, right? In 2016, it's hard to find good old rock'n'roll anymore, but maybe we're looking in all the wrong places? Look blues, baby. It's come full circle. Now, there's so many great blues bar bands coming up regionally that scratch that rock'n'roll itch, it's a damn renaissance. Here's five.

Lance Lopez rocks.There's no doubting that. He might've renamed himself Lance Loud but that name was already taken. Coming out of Texas, Johnny Winter and Stevie Ray Vaughan are influences and have been since he was 14. He played in the bands of soul singer Johnnie Taylor [1934-2000], contemporary blues man Lucky Peterson and rock great Buddy Miles [1947-2008]. His eight CDs since 2003 attest to the fact that he's nobody's fool, writing, singing and covering , on his current CD, Live In NYC, "Traveling Riverside Blues' by Robert Johnson [1911-1938]. Jeff Beck's a fan. So is acclaimed drummer Kenny Aronoff who played with John Mellencamp from 1980 to 1996. In fact, besides this totally rocking manifesto recorded live in New York City, Aronoff, Lopez and singer Fabrizio Grossi have their own Supersonic Blues Machine with a CD called West of Flushing, South of Frisco with guest shots by ZZ Top's Billy Gibbons, former Allman Warren Haynes, Walter Trout, Robben Ford, Eric Gales and Chris Duarte.

Jeff Jensen's Live: The River City Sessions (Swingsuit Records) also rocks. Hard. The fact that he's playing the blues is almost an afterthought. In Jensen's hands, blues is only the vehicle in which to deliver his rock'n'roll. The passion, the emotion, on eight originals and three well-chosen covers by this singer/songwriter/guitarist is not only palpable, but should cut right through to your innards. "Heart Attack and Vine" is one great Tom Waits cover. He even sings it Waits-style through a bull-horn. His interpretation of Dylan's "All Along The Watchtower" has more to do with Hendrix's famous cover than the original. And damn if he doesn't make T-Bone Walker's 1947 "T-Bone Shuffle" come alive again. After 2013's Road Worn and Ragged, last year's Morose Elephant and 400+ concerts in 30 states and 10 countries, his able bandmates-bassist Bill Ruffino and drummer Robinson Bridgeforth-give new meaning to the term "power trio."

Harper and Midwest Kind might be a clunky name for a band but, yeah, they rock. This wild Blu Harp Records 11-track release led by Peter D. Harper on vocals, harmonica, keyboard, djembe (hand drum) and didgeridoo backed by guitar, bass, drums and a different band for one track, "I Can't Stand This," is a real hoot. Harper's an Aussie and, being from Australia, inserts his didgeridoo into the mix whenever he can. It's an ancient wind instrument-call it a wooden trumpet if you want-that emits a seriously demented sound within the context of what's going on, but it sets Harper apart for sure. His touring band, Midwest Kind, is from Detroit. Go figure.

Another awkwardly named band, In Layman Terms, is a brother/sister act from Virginia whose self-released Tangled debut shows some real spark and promise, especially when you consider Cole and Logan Layman are both still in high school. These multi-instrumentalist singer/songwriters oftentimes tour with their mother on drums or as a duo. Here, they cover Howling Wolf ("Smokestack Lightning") and Janis Joplin ("Move Over") as well as writing songs well beyond their tender years ("Fake It 'Til I Make It").

Dusty Road (Funky Joint/335 Records) by Brothers Brown is the hotshot debut of two seasoned veterans, both named Paul Brown, one from Los Angeles, one from Nashville, who got guitarist Larry Carlton's 335 label to distribute their own Funky Joint indie label. They even got Little Feat's Paul Barrere on slide for the title tune. These 12 originals rock with style, aided by bassist David Santos and drummer Pete Young. Paul #1 plays guitar and sings while Paul #2 plays keyboards and sings. The result is a party...and a total keeper.