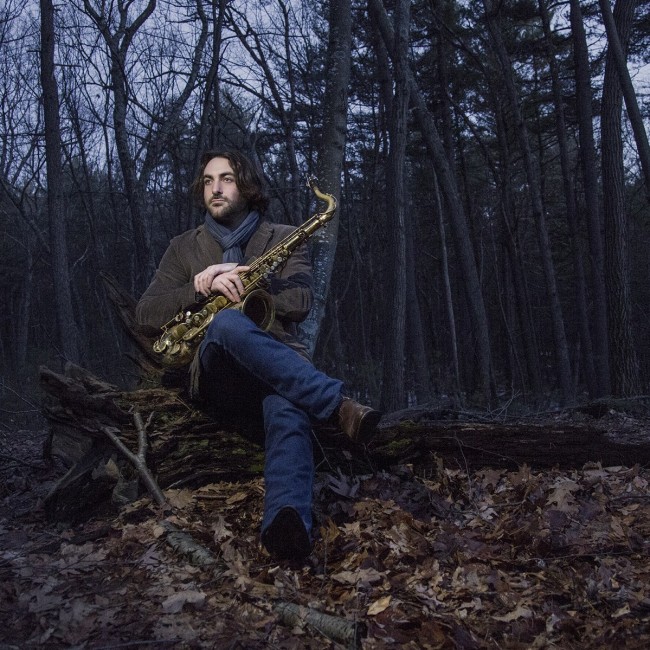 Sax Man Noah Preminger has an affinity for the blues. (Photo : Jimmy Katz)

When Blind Willie Johnson recorded "Dark Was the Night, Cold Was the Ground" (a wordless spiritual filled with great guitar work and his moans and groans signifying a palpable longing and abject fear of death), how could he have had any idea whatsoever in 1927 that it would become one of the greatest American pieces of music of all-time? Fifty years later, in 1977, the recording itself would be launched into outer space aboard Voyager Golden Record along with 26 other examples of human culture just in case any aliens from another planet wanted to know more about us. Thirty-nine years after that, in 2016, Dark Was The Night, Cold Was The Ground is the sound of a Connecticut sax man getting real. For his fifth CD, supremely talented Noah Preminger has taken nine sterling examples of old-time pre-WWII Delta Blues to string together as progressive jazz, transmogrifying these ancient bluesmen's original intent into a whole 'nother -- and quite fascinating -- animal.

Preminger's title tune has no words either but with trumpeter Jason Palmer, bassist Kim Cass and drummer Ian Froman, Preminger's sax wails, groans, moans and conveys a similar sense, maybe not of death this time, but certainly of human frailty.

This is one unique project: The "Hard Times Killin' Floor Blues" of Skip James [1902-1969] is turned into a mélange of prog-jazz. James, son of a Mississippi bootlegger, recorded some classic minor-key blues in 1931 but The Great Depression killed off his career and he faded into obscurity until the 1960s when the folk and blues boom on college campuses nationwide made him a star again upon being rediscovered. British bands Cream and Deep Purple covered him, and he happily enjoyed fame at festivals and clubs, as the baby boomer generation yearned for the real thing. Too bad he never made it out of '60s alive. He died in 1969 Philadelphia at 67.

Blind Lemon Jefferson would turn over in his grave if he heard his 1927 "Black Snake Moan" turned into a joyous New Orleans-styled romp. They say Blind Lemon froze to death on the streets of Chicago in 1929 at the age of 36.

As one listens to these blues classics done up for the very first time in this way (I dare any reader to prove me wrong), one gets a sense of deep and overpowering blues spirit which, as any historian will tell you, was the way slaves made themselves feel better about their sordid condition. They sang the blues. So blues does not bring one down; conversely, blues brings on an uplifting condition. Blues like this, though, is more of an intellectual exercise.

Dig Robert Johnson's "Love In Vain." It was Mick Jagger who turned my 18-year-old soul onto this song in 1969 as covered by the Stones. Originally recorded in 1936 by the man who is said to have actually sold his soul to the devil at the crossroads for fame and fortune only to die months later at 27 by the hand of a jealous husband (with whose wife Johnson was having an affair), Preminger's jazz version is respectfully mournful, his sax crying and pleading over love still being in vain.

When Mississippi John Hurt [1892-1966] recorded "I Shall Not Be Moved," it was filled with righteous indignation. The song seemed to have a life of its own and wound up being a musical staple of the civil rights movement. Preminger uses it to close out the CD on a very spiritual and uplifting note.

Noah Preminger is not finished. He will also have a different quartet recording released later this year with legendary drummer Billy Hart, guitarist Ben Monder and bassist John Patitucci on the vinyl-only French label Newvelle.