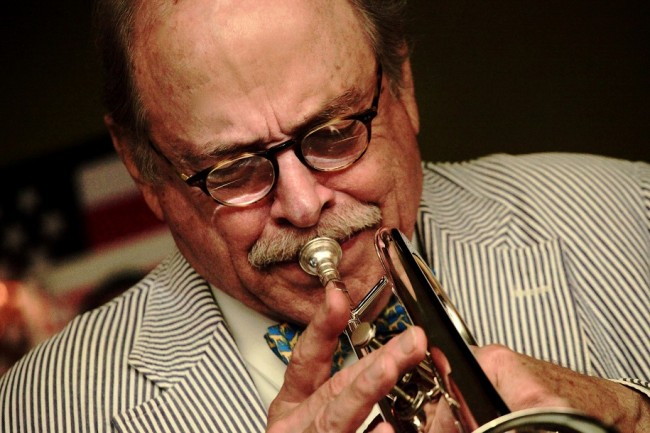 The year was 1992. The venue was The Landing in San Antonio, Texas. Bandleader Jim Cullum played cornet and led his sextet through a roots-reverent rendition of George Gershwin's 1934 folk opera complete with the story's narration by none other than William Warfield, who portrayed Porgy opposite the legendary Leontyne Price as Bess in the definitive 1950s Broadway production. Thus, Porgy And Bess-Live (Riverwalk Jazz), by The Jim Cullum Jazz Band, is a significant look back at one of America's greatest musicals, only instead of voices singing such staples as "Summertime" and "I Got Plenty O' Nothin'," it's the horns that do the talkin'.

Highly entertaining, using a Dixieland base as a launch pad for swingin' scintillating solos by Allan Vache (clarinet), Mike Pittsley (trombone) and John Sheridan (piano), ably assisted by Don Mopsick (string bass), Howard Elkins (banjo and guitar) and Ed Torres (drums), this double-disc experience has been described by Cullum as the highlight of his life. It's also now one of the highlights of my 1,200+ CD collection.

From the iconic opening sentence ("It's nighttime in Catfish Row") to the closing bonus of an interview with William Warfield, over the course of 47 tracks, a palpable sense of these particular characters and this particular time and place, emerges as the plot of Warfield's spoken words moves the action forward. "Jazzbo Brown Blues," "Summertime" and "A Woman Is A Sometime Thing" precedes the arrival of Porgy prior to the listener "meeting" Crown and Bess. By the time the horns emulate Ira Gershwin's lyric to "Bess, You Is My Woman Now," the listener is fully invested.

Disc #2 contains the eternally awesome "It Ain't Necessarily So." Even devoid of lyrics, its essence remains. Warfield gets dramatic with a reading of that singular scene wherein he intones "there's evil afoot today" and indeed there is. Still, as life progresses on Catfish Row and the band gets down bigtime on such jams as "Strawberry Woman," "Here Come De Honey Man" and "Crab Man," Warfield takes us inside Serena's room prior to meeting Clara. It's almost as if the instruments represent the characters a la Prokofiev's Peter And The Wolf.

[Spoiler Alert] With the wistful, hopeful "There's A Boat Dat's Leavin' Soon For New York" and then Porgy surviving the police investigation only to learn Bess isn't dead after all, it ends with "Oh Lawd, I'm On My Way." This one's a keeper.