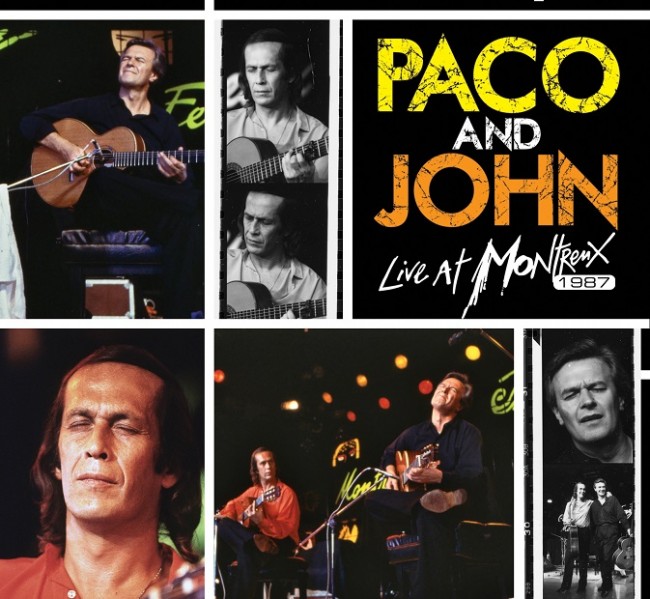 They could've called this one When Titans Collide. But they didn't. It's Paco & John Live at Montreux 1987 (Eagle Rock), for on the evening of July 15, 1987, at the prestigious Montreux Jazz Festival in Switzerland, guitarist John McLaughlin teamed up with guitarist Paco de Lucia [1947-2014] for a complex stringed evening featuring the kind of chops only the masters can achieve.

Decidedly Flamenco, the two played as if each man had 15 fingers instead of 10. Their dexterity alone in nimbly criss-crossing each other's riffs like spiders running amok is genius, but there're so many notes flying through the air, after a while it's almost mind-numbing. But not quite. The two CDs and one DVD totally capture this rare night that could've been called Artistry With No Artifice. But it wasn't.

This is no re-issue. For whatever reason, it took Eagle Rock 29 years to release this evening on CD. John starts it off with a dazzling display of solo acoustic histrionics followed likewise by an even more dense amalgam of note clusters from Paco. Highlight #1 happens when the two unite for the first time on Chick Corea's instantly recognizable "Spain."

The evening progresses through compositions by both musicians, including from their 1990s super group (The Guitar Trio) with Al Di Meola. They also cover Egberto Gismonti's samba-soaked "Frevo." Throughout, the crowd is super-enthusiastic, spurring the two musicians on to heights that, as John said later, surprised even him.

Paco, ever the master of the faster when it comes to Flamenco music, was a tough cookie to keep up with. His particular brand of such is the almost impossible-to-play "Bulerias" strain which originated in 19th Century Spain. Meant to be dramatic and outrageously fast, it usually ends Spanish events because by the time it's over, folks are too pooped to pop anymore. But not John. He responds to such dexterity with his own brand of muscle.

It must have been a mind-blower to witness live.