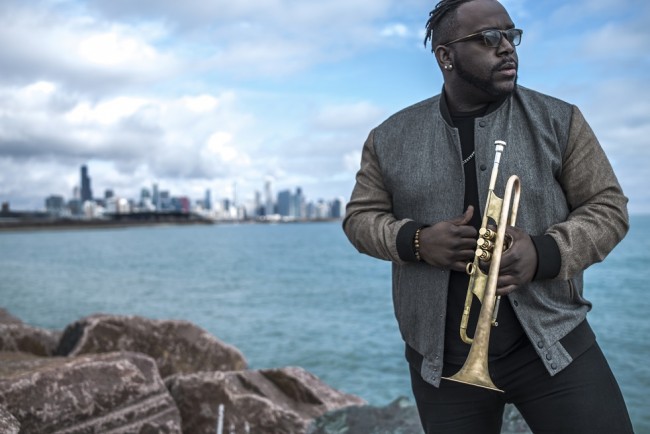 Marquis Hill reimagines his favorites from growing up in Chicago on 'The Way We Play.' (Photo : Deneka Peniston)

Trumpet Man Marquis Hill, 29, includes spoken-word passages, hiphop, funky R'n'B, sweet soul and funkalicious jazz in his Blacktet. Going on four years now, they're tighter than a mosquito's tweeter. This, then, he likes to say, is The Way We Play for his Concord Music Group debut.

Hill won the 2014 Thelonious Monk International Jazz Competition. He's taken his Blacktet-alto sax man Christopher McBride, vibraphonist Justin Thomas, drummer Makaya McCraven and bassist Joshua Ramos-back to Chicago for a look-see at what he grew up on in The Windy City that even includes vocalist Meagan McNeal introducing the band with the exact same theme that the Chicago Bulls used to introduce Michael Jordan.

From his individualistic take on Gigi Gryce [1925-1983] with a mash-up of his title tune and Gryce's "Minority," to the "Moon Rays" of Horace Silver [1928-2014], Hill takes from these legends to imbue their original intent with ChiTown's duality (North and South sides) and its hustle and bustle, juxtaposed with moments of serene beauty and clarity. In Hill's hands, "Moon Rays" becomes heady trance-like drum'n'bass hipster jive.

Vocalist Christie Dashiell brings the sex appeal to the 1949 Billy Eckstine hit "My Foolish Heart" as, suddenly, it's like you're listening to another album. That feel continues with a total update of The Tommy Dorsey Orchestra's 1940 "Polka Dots and Moonbeams," which signaled the arrival of a skinny unknown singer from Hoboken, NJ. Hill invests the romantic allure of a very young Sinatra's first brush with success with an irresistible solo flugelhorn.

Monk's "Straight No Chaser" stays roots-reverent as does the oh-so-cool "Beep Durple," a rare post-bop Carmell Jones tune from 1965 featuring Vincent Gardner on trombone over a fractured but stable rhythm section twist.

It all ends with "Juan's Interlude" straight from the jungles of Peru and Charlie Chaplin's 1936 "Smile" done as a heavenly trumpet and bass duet. Somewhere, Michael Jackson is smiling.