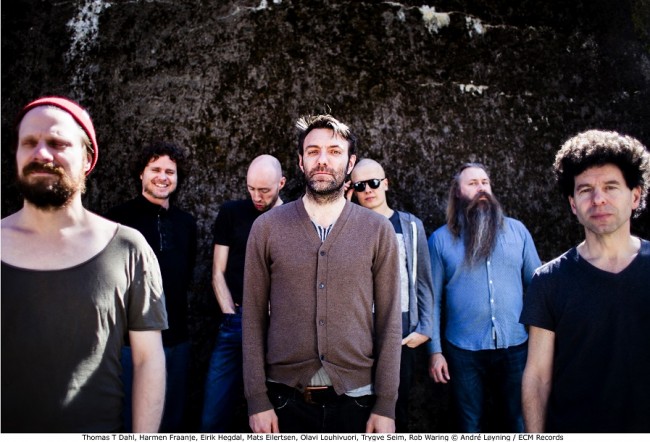 There's a subtle sophistication at work on Mats Eilertsen's ECM Rubicon debut. His bass has already graced 12 previous ECM sessions of other artists as produced by Manfred Eicher, but now, just like Julius Caesar in 49 B.C., whose army crossed the Rubicon River knowing it was too late to turn back, Mats has laid the gauntlet down. His septet is rather wondrous. And there's no looking back.

Fellow Norwegian Thomas T. Dahl plays a kind of haunting guitar that floats, darts and punctuates the proceedings with a kind of Wes Montgomery verve. Finnish drummer Olavi Louhivuori is a finesse percussionist providing the glue between the solos. Dutch pianist Harmen Fraanje works well with Dahl's ever-spiraling guitar solos and it is this piano/guitar tandem that takes center stage until the star of the show emerges: Eirik Hegdal plays soprano sax, baritone sax, clarinet and bass clarinet. He's at his best when having "discussions" with the other sax man, Trygve Seim, who played with Mats in a band called The Source (check out their 2005 self-titled ECM effort). Plus, one cannot underestimate the contribution of New York vibraphonist Rob Waring (an expat who has lived in Oslo, Norway since the 1980s).

It all amounts to a slithering snake of an album, soft, discreet, mysterious and, in spots, absolutely gorgeous. Oftentimes, music this ethereal isn't kinetic enough to engage, but Rubicon's many delights are in the differences between each track from the opening "Canto" to the closing "Introitus." The relaxed essence, low-key guitar histrionics, and, especially, the two saxmen, offset by the lulling vibraphone, all collide in a very discreet and eminently listenable hour. Eilertsen may not be a jaw-dropping funky plucker like Stanley Clarke but his twin talents of composition and being a team player is tantamount to being a leader by example. We'll obviously be hearing more Mats as the years go on.