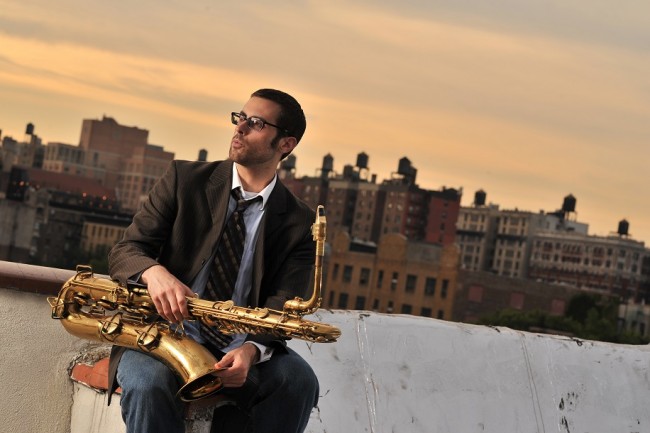 There's a point between where jazz fans exist yet the casual music fan might get lost. Baritone saxophonist/bass clarinetist/composer/bandleader Tony Lustig wants to bridge that gap. To that end, his quintet is Taking Flight (Bimperl Entertainment & Media) on eight wildly disparate originals "that represent what jazz music means while still making it enjoyable for someone who has never listened to jazz before," according to the artist.

"For Wayne" is for Mr. Shorter, who continues to inspire, teach, perform and record at 82. (In fact, he's currently working on a super-band with Chick Corea and Carlos Santana.) "Change Is Comin'" is the opener and could be a jazz radio single (we should have more of those). "Prometheus" is the Greek god who created mankind by absconding with some fire right off Mount Olympus OR it's a tune he wrote after seeing the 2012 Ridley Scott movie of the same name. I prefer to believe it's the former.

His quintet has trombonist Michael Dease (whose Father Figure is one of the better jazz efforts of the year but I'm partial to 'bone men.) The piano/bass/drums rhythm section of Samora Pinderhughes/Ben Williams/Ulysses Owens respectively adds the kind of kaleidoscopic constancy that Lustig and Dease on the front line depend upon.

Lustig came to New York City from his native Detroit where he went to Michigan State University and ultimately to Julliard. Once firmly ensconced in the jazz capitol of the world, he settled in nicely with Wynton Marsalis and the Lincoln Center Jazz Orchestra, The Christian McBride Big Band, Arturo O'Farrill and the Afro-Latin Jazz Orchestra as well as the Birdland Big Band, George Gee Swing Orchestra, Cab Callaway Orchestra and even disco queen Gloria Gaynor's band. This might be why he seems to write big band charts for his little but loud quintet.

Herbie Hancock and Wayne Shorter Beseech Next Generation of Artists