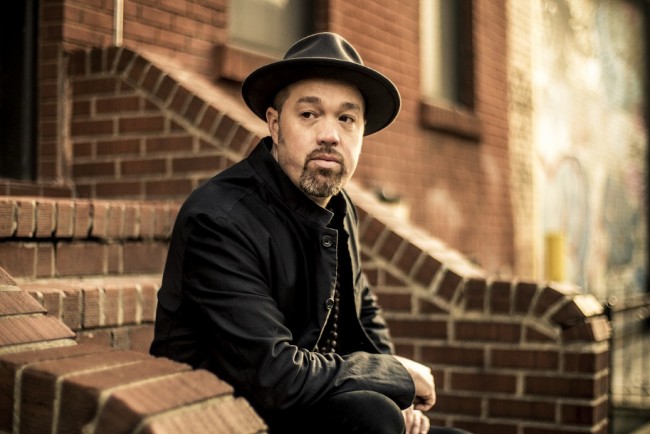 Guitarist Eric Krasno waiting on a friend. The composer has helped the Stones onstage and now helps himself on CD with 'Blood From A Stone.' (Photo : courtesy Feel Music Group)

Guitarist Eric Krasno's Blood From A Stone (Feel Music Group) rocks righteously on its merry way through funky blues, R'n'B, Americana and what you might call instant classic rock. It's a collaborative effort between he and his main man Dave Gutter who holed up in Gutter's Maine barn with Ryan Zoldis to write, record and listen over and over to The Bobby Blue Bland Blues Band's 1974 Dreamer and the controversial-in-'68 Electric Mud by Muddy Waters.

Opener "Waiting On Your Love" has as much to do musically with Jimi Hendrix as it does Bland or Waters. "Please Ya" could've been recorded by Al Green in his early days. "On The Rise" gets jammy with its drum and bass groove, samples and vocal harmony. Krasno sings from the soul and, during post-production in Brooklyn, added his own bass, moog synthesizer, Wurlitzer organ and that distinctive Brazilian percussive cajon. Keyboardist Nigel Hall also adds major spice throughout.

Krasno is that guy who you've probably heard hundreds of times for the past two decades without knowing it. He's been onstage beefing up the Rolling Stones and The Roots. His hot smokin' Soulive trio has been around for 16 years. (Their 2010 Rubber Soulive is arguably one of the best album tributes ever.) He's produced and written for Talib Kweli, Norah Jones, The Tedeschi Trucks Band, 50 Cent and Aaron Neville. In fact, former Allman Brother Derek Trucks chips in on guitar for the heavily percussive "Curse Lifter." When they trade licks like Eric and Duane on "Layla," Krasno is in your right speaker and Trucks is in your left.

It's almost unfair for one guy to have so much talent. This is his first foray into singing lead and he's a natural, especially on the love-gone-wrong nightmares of "Torture" and "Jezebel." Even he says that he could've very well spent his whole career writing and playing in the service of others: "I didn't know I had this in me." Now both he and we know.