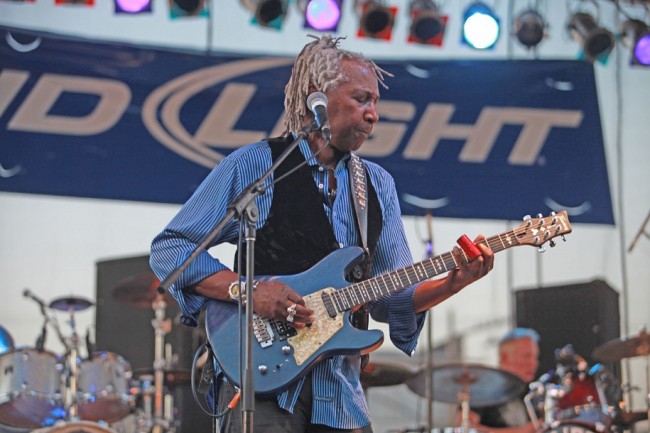 Stephen Stills once called Eddie "Devil Boy" Turner "a monster guitar player." Born in Cuba, raised in Chicago, Turner played in San Francisco with Tracy Nelson and Mother Earth in the 1970s, Colorado's hard-rock Zephyr in the 1980s and The Otis Taylor Band in the 1990s. In the new millennium, his 2005 Rise, 2006 Turner Diaries and 2010 Miracles & Demons make him his generation's equivalent of Hound Dog Taylor or Clarence "Gatemouth" Brown. Now, he's Naked...In Your Face (7-14 Records) on his first ever concert CD.

This is one extrovert who was born to be a front man. Recorded live at The Blues Can in Calgary, Alberta, Canada, his power trio format includes his Trouble Twins (bassist Anna Lisa Hughes and drummer Kelly Kruse). They do make one hell of a holy noise. Hughes is ball-buster bassist of gargantuan proportions and, as a lead singer, can belt it out with the best of them. (She takes the vocal reins for "Don't Let Me Be Misunderstood," the 1964 Nina Simone hit further popularized by The Animals in 1965.)

Turner goes back to his Cali roots by covering Electric Flag's "Buried Alive In The Blues," a song that the quite legendary Michael Bloomfield [1943-1981] originally put his lead guitar genius to but, I gotta tell you, Turner cuts even him as he slashes through the tune like a serial killer meant for mayhem.

Some of the songs reach epidemic proportions -- like the 9:15 "So Many Roads" or the 12:16 "Dangerous" -- but jamming out long and loud has always been one of Turner's fortes. He's a bona-fide shredder, equally at home in a metal band or a blues band.

Take Muddy Waters and Howling Wolf. Put them through a blender with Cream and Hendrix. That's Eddie Turner.