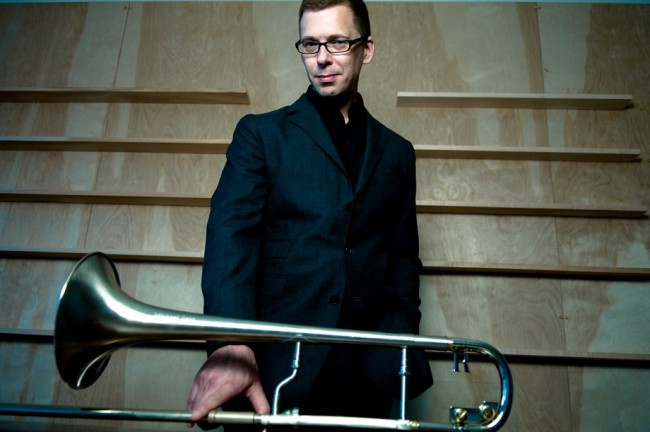 Tromonist/Composer David Gibson is making a case for himself to be included in the conversation of big-time 'bone men. A disciple of Curtis Fuller, 81, Gibson follows up last year's Boom with this year's Inner Agent (Posi-Tone). It's a free-swinging affair filled with adventure, high-wire daring and sweet melodic and harmonic constructions. It even closes with a Beatles song.

Gibson, being the college professor that he is, takes inspiration from a wide and varied set of parameters. He wrote "The Scythe" after reading The Four Agreements (1997) by Don Miguel Ruiz. The track may not tell you how to deal with the angel of death as the book does but, in under five minutes, its joyous execution will put a smile on your face and a strut in your step (check out the elongated 11-minute live version below) . In fact, that's the thing about Inner Agent: all nine tracks are uplifting to the point where you just want to play this sucker over and over again. Kudos as well to his supporting cast of trumpet, piano, bass, drums, tenor and alto saxes, and a special shout-out to tenor man and label mate Doug Webb whose seventh CD, Bright Side, is also a solid set of adventure.

The covers are sublime: Nina Simone [1933-2003] sang "I Wish I Knew (How It Would Feel To Be Free)" in 1967. Here, Gibson takes that gospel-soul melody and blows it languid and sweet. He does Curtis Fuller's "The Court" as a tribute to the time he spent with the older musician in Slide Hampton's band.

Funk rises to the fore in some hot "Gravy," a tune he originally wrote for his Hot Pants Funk band with which he gigged for almost seven years at the upper west side (NYC) club Smoke. His "Sweetness" comes out pure, unfettered and alive as a rewrite of "Poinciana," the 1936 Cuban folk melody that a host of jazzers have interpreted including Glenn Miller in 1943, Bing Crosby in 1944 and Ahmad Jamal in 1963. (There was even a disco version in 1978 that made the charts by one-hit wonder Paradise Express.)

It all ends with the tasty morsel of George Harrison's "Here Comes The Sun." Bravo!