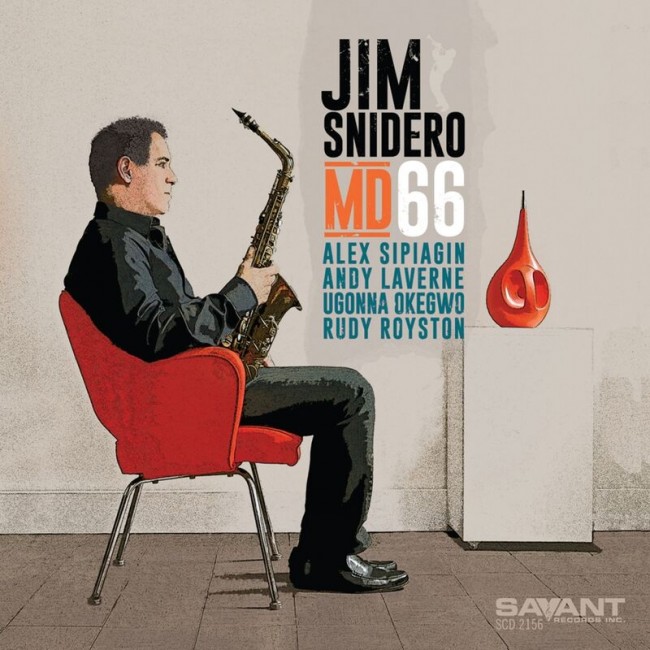 It's one thing to be in tribute to an artist, a band or a classic album. It's another thing, and one rarely done if done at all, to be in tribute to a band's fluid changes and personal interplay or chemistry. This is what Jim Snidero accomplishes beautifully on MD66 (Savant). His muse is the second great Miles Davis Quintet (Herbie Hancock, Wayne Shorter, Ron Carter, Tony Wlliams). Yet 'MD66' is almost all-original. (The first great quintet of Miles Davis had John Coltrane, Red Garland, Philly Joe Jones and Paul Chambers.)

Composer Snidero plays alto sax. Over the course of 35 years, he's recorded 19 albums as a leader and has played with a litany of names high up on the jazz food chain like Dave Holland, Jack DeJohnette, Mulgrew Miller and Tom Harrell. He's also authored his Jazz Conception series serving school systems across the country and in 57 other countries.

On MD66, he's gathered the kind of players who will make you sit up a little straighter in total appreciation. Pianist/composer Andy Laverne chips in with "Un4Scene." His pianistics span the gamut of influences from Tatum and Peterson to Tyner and, yes, Hancock. Trumpeter Alex Sipiagin doesn't so much as copy Miles as he transcends him into a more modern and accessible animal, especially on the one Miles tune here: "Blue in Green." Bassist Ugonna Okegwo is more Jaco than Ron but that's okay. He rumbles there down below coming up for air on spirited flights of fancy, and his work with drummer Rudy Royston is to act as one.

Besides the totally improvised-in-the-studio "Free Beauty," Snidero plays like John Coltrane on "Recursion" which rumbles and rambles on for 9:37 without once losing the thread. In fact, the entire 52:40 is rather economical when you think about it. Its eight tracks are lean and muscled with something always going on to delight. MD66 is wholeheartedly recommended.