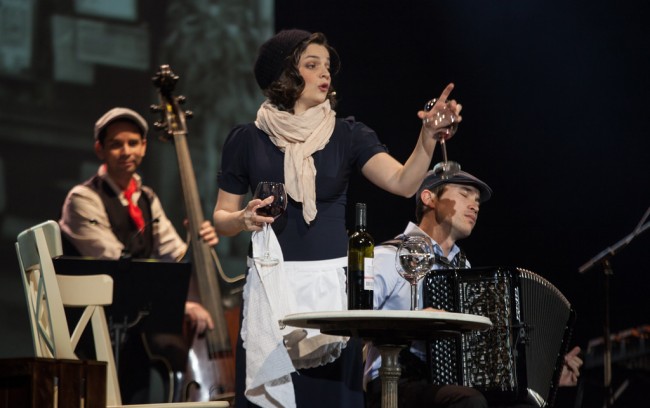 The songs of revered French cabaret artist Edith Piaf are given new life in the musical PIAF! The Show, starring singer Anne Carrere as the legendary chanteuse. Helmed by writer and director Gil Marsalla, PIAF! The Show plays at Carnegie Hall on Friday, January 6, for a special one-night-only performance. Tickets for the 8 p.m. engagement are available now. Classicalite caught up with Anne and Gil to discuss their work in PIAF! The Show and the global influence of Piaf's music.

Classicalite: Anne, how did you come to be involved in PIAF! The Show? As a classically trained musician, this musical appears to be your large-scale theater debut.
Anne Carrere: The producers of PARIS! The Show loved my work in the role of Edith Piaf and offered me the opportunity to be the voice for the 100th anniversary Piaf tour, which has been an amazing experience. Since I was a child, I have always loved to sing and act, so I decided to make it my profession. I began preparing for my stage career by attending the art school Salon-de-Provence in the South of France. I use a lot of my experience from my studies to help me in PIAF! The Show.

I wanted to pay homage to the true Edith Piaf and represent her as a person more than a superstar, someone who shared her passion of life with all her friends and the people around her. It's important to me to portray all the dramatic events that she had in her life. When I perform "Mon Dieu" and "Hymne à L'amour" during the second part of the show, the audience is able to share in the emotion.

Gil, how did you discover Anne for the part?
Gil Marsalla: I wanted to find someone to embody Edith Piaf, not just someone to imitate her, because it would be a mistake to copy her. When I heard that this young singer came from a little village in France, I knew I had found the voice that I was missing. Anne is perfect for the role of Edith Piaf in PIAF! The Show and was exactly what I was looking for. Anne uses her beautiful voice and charisma to interpret Piaf's work.

I imagine you're both big fans of Edith Piaf's music.
AC: I used to listen to Piaf with my grandmother when I was a child. When studying music, Piaf was part of the curriculum and I sang her songs on stage. I really became a big fan of Piaf's when I discovered her life story and career. A lot of people often say that my voice seems very similar to Piaf's. Perhaps I was destined to play this role! However, I would never be able to give a successful performance without a lot of hard work.

Why do you think Edith Piaf's music still resonates so strongly today?
She's an international legend. Her acclaimed songs are shared all over the world. The story of her career in the critically acclaimed movie La Vie En Rose further preserved her legendary status through reaching younger generations who otherwise may not have been familiar with her work.

GM: I'm continually impressed by how popular Piaf's music is today, not only in France but around the world. Edith Piaf's voice was so unique; nobody can ever replace her. She is considered one of France's greatest international stars. In her biography, No Regrets: The Life of Edith Piaf, author Carolyn Burke says that "Piaf has acquired a legacy as one of the greatest performers of the 20th century, and her voice and music continue to be celebrated globally."

Gil, how did this project initially come about?
Since 2009, I wanted to share my experience and expertise of French music and bring it to an international audience. I first met Anne in 2014, when she auditioned for PARIS! The Show. I was so captivated by Anne's skills and natural charisma that I offered her the role for the Piaf show. I wanted to create the biggest show ever produced on Piaf, with the goal to tour it all over the world. Currently, the show has played to over 500,000 people in 30 countries. The highlight of the American leg of the tour will be the concert at Carnegie Hall on January 6, 2017, which is actually the 60th anniversary of Edith Piaf's final performance at the famous venue.

Where can people hear the music of PIAF! The Show?
AC: There is a CD and DVD of PIAF! The Show. In addition, they can be purchased at the Carnegie Hall performance, and, like at every concert, I will personally autograph those items for all the people at a meet-and-greet event following the show.

What's the plan after the Carnegie Hall performance?
GM: For the rest of 2017, we are planning our most important tour ever for a French musical show. More than 40 concerts are booked between now and 2019 in the US and throughout the world.

Symphony Under the Stars Salutes Broadway This Month in Montana