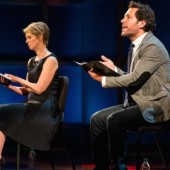 Paul Rudd and Cynthia Nixon recalled the life and work and Albert Einstein in a reading of Alan Alda's play 'Dear Albert.'

Classicalite's Five Best: Characters, Then and Now, for Whom Classical Music Was a Passion...Not Just Sherlock! >>

With the triumphant return of the BBC's Sherlock to our screens, following his supposed death at Reichenbach, the series everyone is talking about prompts another thought for classical fans. It is an ongoing characteristic of Arthur Conan Doyle's books about his great detective, that Holmes is passionate, if not hugely accomplished, about the violin, which took pride of place alongside recreational drugs and mentally sparring with Dr. Watson. And classical music has held a special place for other perhaps surprising, and unlike Sherlock non-fictional, figures.