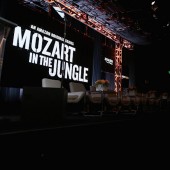 The original 1979 Broadway cast album of Stephen Sondheim's hit musical is one of 25 "culturally, historically, or aesthetically significant" recordings inscribed in the LOC's great book of gravitas this year.