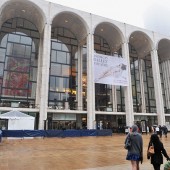 Miller Theatre at Columbia’s "Bach, Revisited" Pairs His Masterpieces with Works by Saariaho, Reich and Tower >>

Columbia University’s “Bach, Revisited” series pairs a work by a living composer with the Bach work that inspired it. These concerts at the Miller Theatre will be curated by the composers--Kaija Saariaho, Joan Tower and Steve Reich--who will also participate in onstage discussions about their works.

Classicalites, George Fetner needs your help. As we told you in this week's Quickies, the composer, administrator, guitarist and all-around good guy is raising money, via Kickstarter, to put out his debut album of computer-generated compositions--'Beneath the Ice.'