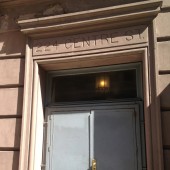 Second only to, maybe, La Monte Young and Marian Zazeela's Dream House on 275 Church Street, Phill Niblock (recent winner of all that John Cage award money) might just have the better loft in Chinatown. I mean, you don't have to take your shoes off at Phill's place on Centre Street. And while he's off to Europe for the summer, Classicalite fave Ben Vida ably filled the scant few seats for, perhaps, the best concert of this year's UNSOUND FESTIVAL--New York City edition.