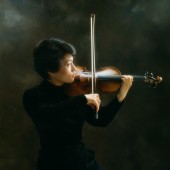 This could be the year that a skateboarding area defeated a major renovation of one of the world's leading arts centers. The story so far...London's Southbank Centre has expended a great deal of time and energy on drawing up plans to renovate their premises with the promise of lots of free arts activities for all. Last month, the Mayor of London Boris Johnson essentially said, "Fine, but you're leaving the skatepark alone." Problem.

The stars turned out to celebrate the career of master lyricist Don Black, as his new show with Andrew Lloyd Webber is readied for its West End première.