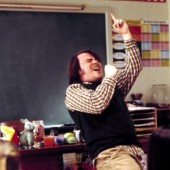 'School of Rock' Musical in the Works: Andrew Lloyd Webber Has Signed On >>

It has been announced that the hilarious rock comedy "School of Rock" will be making its stage debut in fall 2015. "School of Rock: The Musical" is based on the hit 2003 film staring Jack Black as a failed rock star who poses as a substitute teacher at a prestigious prep school and attempts to form a rock band out of his class. The Paramount film was directed by Richard Linklater and written by Mike White, who starred alongside Black in the movie. The musical's creative team is just as surprising as the production itself. Andrew Lloyd Webber, Glenn Slater and "Downton Abbey" creator Julian Followes have all signed on to the project. The show will feature tunes from the movie, as well as new music by Lloyd Webber with lyrics by Slater, known for his work on such films as Disney's "Tangled" as well as Broadway musicals including "The Little Mermaid" and "Sister Act." The book for "School of Rock" is being written by Fellowes, who wrote the stage version of "Mary Poppins" for Disney and producer Cameron Mackintosh.